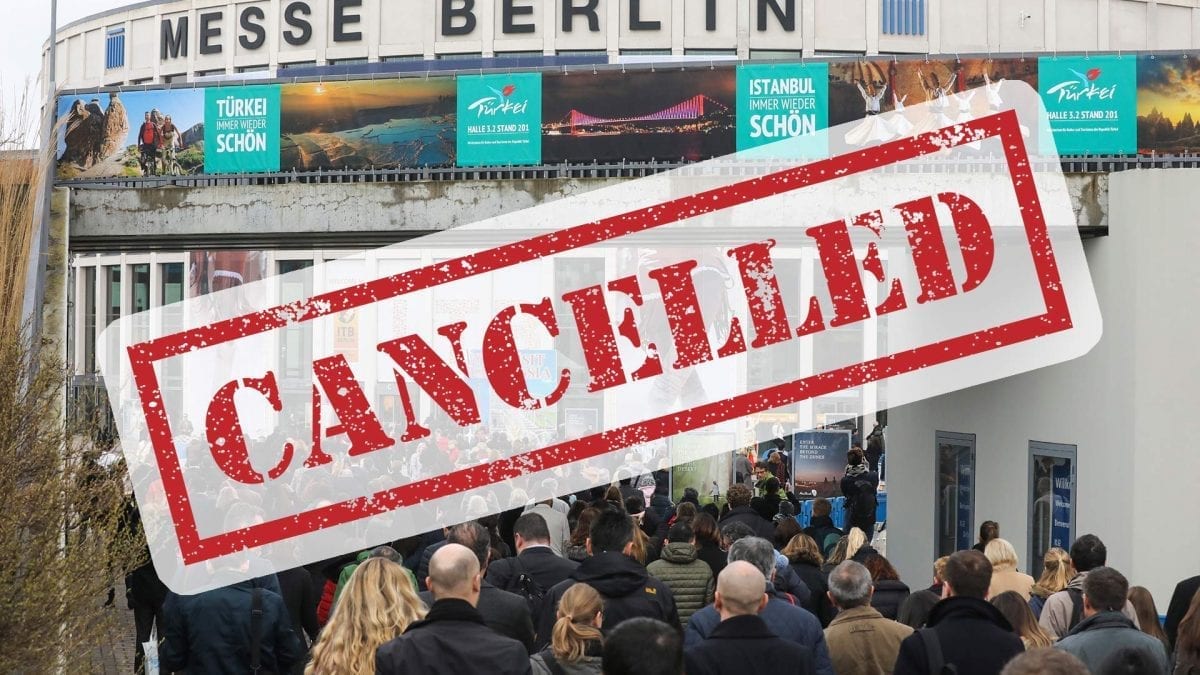 After a week of mounting speculation the cancellation of ITB Berlin 2020 was confimed today, leaving questions about what happens next for the leading world travel industry trade show. Will exhibitors receive a refund?

Dr. Christian Göke, CEO of Messe Berlin GmbH, said, “It is with a heavy heart that we look forward to the cancellation of ITB Berlin 2020, which has now become necessary”.

Will there be an ITB Berlin refund?

The announcement leaves several questions unanswered, mainly what compensation will be given to those exhibitors and attendees who have had to cancel their flights and travel arrangements? Will there be an ITB Berlin refund?

ITB Berlin 2020 was due to be held in the German capital from 4 to 8 March. However, as the COVID-19 coronavirus spread from Italy across Europe the prospects of the leading global travel trade show going ahead as planned seemed increasingly precarious, especially once Switzerland banned all major gatherings earlier on 28 February.

ITB Berlin show must go on?

Many asked the question, “should ITB Berlin 2020 be cancelled?”

Trade travel website eTurboNews carried a survey of its 230,000 travel industry readers, which indicated a substantial number intended to cancel going to ITB Berlin 2020, and that several exhibitors had confirmed they would not attend.

When Travel Begins at 40 put this to the organisers, via the official ITB Berlin Facebook page, the response was that “only two Chinese exhibitors have cancelled”.

The attitude was very much that ITB Berlin Show must go on.

“Preparations for the upcoming ITB Berlin are well under way, our show takes places, as planned,” a statement released by the organised, said.

As the COVID-19 coronavirus swept through Europe from northern Italy and many events including the Venice carnival were cancelled, and people openly questioned whether global events, such as the Tokyo summer Olympics should be cancelled, the likelihood of ITB Berlin 2020 becoming yet another casualty of COVID-19 increased.

On 24 February organisers confirmed that, “ITB Berlin is taking place as scheduled from 4 to 8 March 2020. Please be assured that the safety and health of our show attendees is our number one priority.”

However, the organisers added that they were constantly monitoring the situation.

“Should there be any changes to the current status, we will take account of any recommendations from the relevant federal and state authorities, and the municipal health authorities, and implement all appropriate instructions accordingly.”

On 26 February, a further announcement was posted on the ITB Berlin website stating that all attendees would need to fill in a form confirming they had not visited certain parts of China, Iran, Italy and South Korea before being allowed entrance to the ITB Berlin show.

At the same time according to Reuters, German Federal Minister of Health, Jens Spahn, announced that Germany was on the cusp of an epidemic.

“The infection chains are partially no longer trackable, and that is a new thing,” he is reported as telling a news conference. “Large numbers of people have had contact with the patients, and that is a big change to the 16 patients we had until now where the chain could be traced back to the origin in China.”

On 27 February, ITB Berlin announced, once more on its website, that lower than normal visitor numbers were expected for the 2020 show. This had followed reports in the press that people had decided not to attend the travel trade show.

By the morning of 28 February, the tone had seemed to alter with ITB Berlin publishing the following statement on their website:

“Messe Berlin GmbH is currently coordinating with the public authorities at federal and state level on how to proceed with regard to ITB Berlin 2020 and COVID-19. It is expected that more detailed information will be available in the evening of 28 February 2020 at the earliest.”

The previous day eTurboNews reported that German Federal Minister of the Interior Horst Seehofer (CSU) saying at a press conference, “I personally believe that you [ITB Berlin] should not perform,” according to the German Wirtschaftswoche.

The story was confirmed by Bild newspaper on 28 February and an official at the Health Ministry according to Reuters.

What is for sure is that as global markets spiral, the cancellation of ITB Berlin 2020 will be a major blow to the Berlin economy.

Also, many will wonder why the decision to postpone ITB Berlin was not taken sooner, especially after major trade shows across Europe had already been cancelled.

Finally, why was the decison not communicated to exhibitors earlier. Just an hour before the announcement of the cancellation of ITB Berlin 2020, Travel Begins at 40 received a confirmation of our participation at the Pearl of Africa event organised by the Uganda Tourism Board and scheduled to be held on 5 March.

While announcing that ITB Berlin is cancelled, Wolf-Dieter Wolf, Chair of the Supervisory Board of Messe Berlin, stated, “We would like to thank all exhibitors and partners from all over the world who over the past few days and weeks have stood by ITB Berlin. We look forward to continuing the trusted relationship with our partners in the market.“

Time will show whether the events of the past week have damaged this relationship.

Currently there are 60 confirmed virus cases in Germany. The coronavirus originated in Hubei Province in China and has infected more than 83,000 people, killing more than 2,800 people, mostly in China, according to data from John Hopkins CSSE.

Cover photo of a past ITB Berlin event from BreakingTravelNews on Flickr.

Cambodia Tourism Revenue up to $4.9 Billion