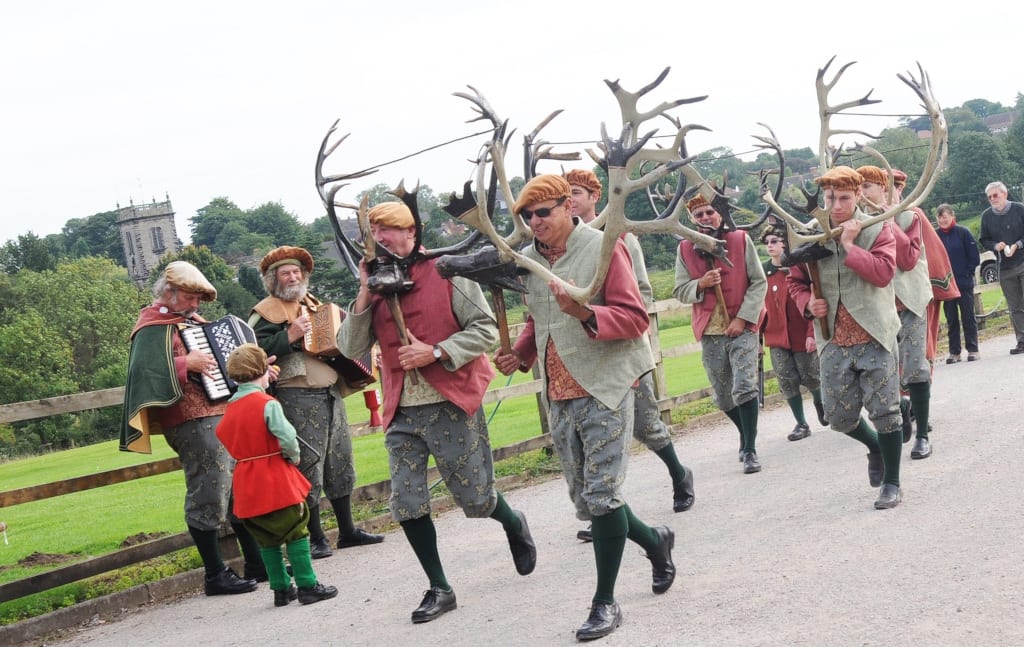 Get Ready for Staffordshire’s Horn Dance

The Abbots Bromley Horn Dance, performed in Staffordshire since 1226, has survived for almost 800 years, and is now one of the oldest remaining annual rituals in the whole of the UK.

After collecting their traditional equipment from the church in the morning, the Horn Dancers – comprising six Deer-men, a Fool, Hobby Horse, Bowman and Maid Marian (who is always male) – perform their dance to music provided by a melodian player at locations throughout the village and its surrounding farms and pubs.

It’s a procession that has taken place almost every year since 1226, and is always held on Wakes Monday: or, more precisely, “the Monday following the first Sunday after the fourth of September”.

While in Staffordshire why not visit the glorious Trentham Gardens, or celebrate the 250th Anniversary of the birth of the circus in Newcastle-under-Lyme.

An eccentric annual draw for visitors from far and wide, this peculiarly English custom takes place in 2018 on Monday 10 September.

Believed to date back to the Berthelmy Fair granted to the Abbots of Burton by Henry III, six men in colourful costumes carry reindeer antlers – believed to date from around 1065 – are accompanied around the village by their fellow dancers.

Preparations for the Horn Dance start at St Nicholas Church from around 7am, and the procession follows a set route around the village as the crowd watches, while attractions also include exhibitions and craft stalls.  The dancers usually return to the church at around 8.30pm that same evening.

Covering a route of some 10 miles around Abbots Bromley – an attractive village boasting an ancient church and several typical Staffordshire half-timbered cottages – the Horn Dance has apparently only been cancelled once, in the 1920s, because the musician was ill and one of the dancers had died.

For an additional eccentric twist, visitors can head to the village’s 16th century Goat’s Head pub where there is still a room named after highwayman Dick Turpin, who apparently stayed overnight after he stole “Black Bess” from nearby Rugeley Horsefair.