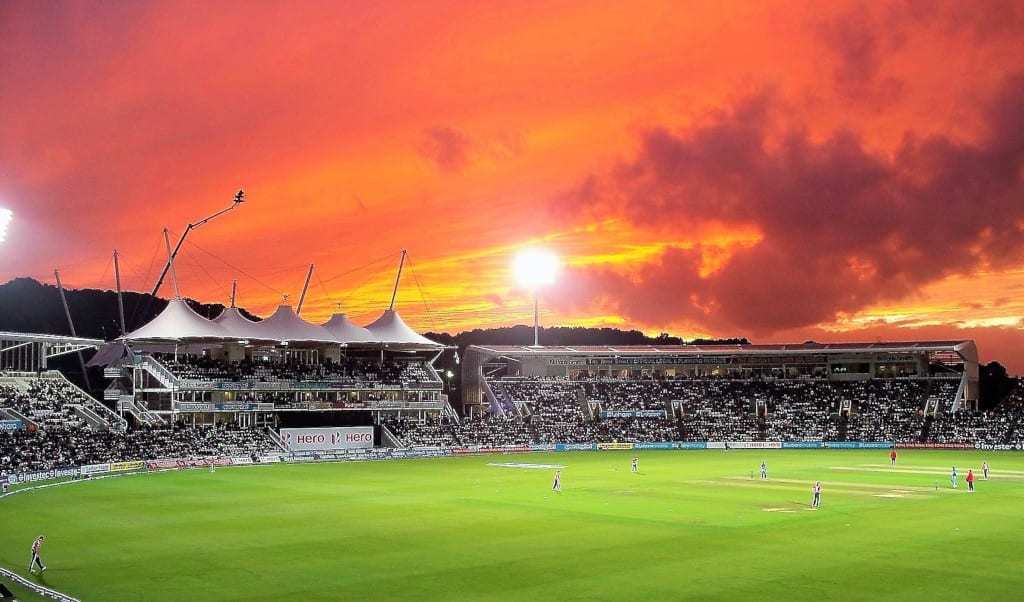 Hampshire, the ‘cradle of cricket’. Howzat?

Hampshire will be reminding everyone in World Cup year exactly why the county is known globally as the “cradle of cricket”.

The 2019 ICC Cricket World Cup will be held across the country between 30 May and 14 July, and – in addition to the county hosting several of the matches – the story of Hambledon Cricket Club, founded in Hampshire in the 1750s, will once again be shared by anyone with an interest in bat-and-ball.

One of England’s most powerful and foremost cricket clubs, it was instrumental in helping to develop many of the early rules of the game before the cricketing world’s focus switched to Lord’s at the end of the 18th century.

“Trying to unravel the exact and true origins of cricket is one of the great medieval mysteries, with much of the answer lying in and around the village now known as Hambledon,” writes former England international David Gower in his foreword to John Goldsmith’s Hambledon: The Biography of a Hampshire Village. “It was the Hambledon team of the late 18th century that ‘raised cricket from a sport to an art’, in an era when the local team was more than a match for any All England team, and when it seemed that the Bat and Ball Inn, run by the legendary Richard Nyren, was the centre of the cricketing universe”.

The Club interchanged its name between ‘Hambledon’ and ‘Hampshire’, with The Bat and Ball pub becoming its clubhouse. Matches were played on Broadhalfpenny Down, which, at that time, also doubled as the village’s sheep common.

The landlord of the nearby Bat & Ball Inn for ten years – between 1762 and 1772 – was the Hambledon captain Richard Nyren. It was under his guidance that the club took shape.

The link between pub and club was more than pure coincidence, however. During Hambledon’s heyday, cricket was linked closely to gambling – and to the drinking of very large quantities of wine, port and sherry.

Plenty of cricket clubs were already in existence, but it was Hambledon that captured the headlines and the imagination of the public during the 18th century. While the sport itself may have predated the Hampshire club and ground by at least two centuries, Hambledon’s standing in the sport was such, that it could even influence, and change, the laws of the game.

In 1771, for example, noted English cricketer Shock White batted against them with a bat wider than the wicket. Within two days Hambledon had legislated as to the maximum width of a bat, and produced a metal gauge to help enforce the amendment.

The 1772 season was also notable in English cricket history because it is from this moment onwards that surviving scorecards become more common – and three of these are from 1772 matches organised by the Hambledon Club. Those matches were all played between a Hampshire XI and an England XI – the first of them taking place at Broadhalfpenny on 24 and 25 June. The two leading online cricket archives actually begin their first-class coverage with this match, which is numbered “first-class no. 1”.

And the rest, as they say, is history.

In 1833, John Nyren – son of Richard – published The Cricketers of My Time, a historic account of Hambledon’s glory years, and noted: “So renowned a set were the Men of Hambledon, that the whole country round would flock to see on their trial matches.”

Hambledon continued to use Broadhalfpenny Down until 1781, when the Club moved to Windmill Down – which is closer to the village itself (and was next to the George Inn…owned and run by Nyren).

But Hambledon’s fall from power had begun. Their star players were getting older. And the club relied on rich patrons: the Earl of Winchilsea’s loyalties, for example, lay in London, and in 1787 he commissioned Thomas Lord to find and build a new ground which subsequently became the Marylebone Cricket Club, the MCC. The effect proved terminal for Hambledon: in 1796, no-one turned up for the club’s AGM; and on 24 and 25 August, 1824 the club played for the last time at Windmill Down, beating Goodwood by two wickets.

There were certainly other important and influential cricket clubs in the country, but none were so well documented. And what is certain is that for two or three decades, a small Hampshire village at the heart of the cricketing world, managed to establish itself as the cradle of the sport.

Today, visitors to Broadhalfpenny Down can find a monument to the famous Hambledon Club…and, better still, pop into the Bat & Ball Inn for a pint of ale.

Hampshire’s historic links with cricket don’t end there, however. Thomas Lord, who was the founder of The MCC at St John’s Wood, is buried in the West Meon Church graveyard in Hampshire, where the village pub – the Thomas Lord – is named after him.

And Hampshire’s William Nicholson – one of the MCC’s star players – gave the most famous club in the world its “egg-and-bacon” colours: the yellow and red coming from the colours of his family’s Nicholson Gin and the Privett village church in Hampshire, which he funded.