Hay Festival announced on 19 September plans for the biggest ever Hay Festival Winter Weekend, 23 – 26 November 2017, including a new 400-seater venue and extended programming.

Taking place in Hay-on-Wye, Wales, beneath the Black Mountains and on the banks of the River Wye, the festival offers four days of family fun within the picturesque surrounds of the town’s independent bookshops, cafés, and markets, just a stone’s throw from the Brecon Beacons National Park.

Blending literary conversation, immersive performances and family workshops, with the best of the town’s seasonal shopping and a chance to explore the famed natural surroundings in all their autumnal splendour, the festival is a perfect winter getaway. 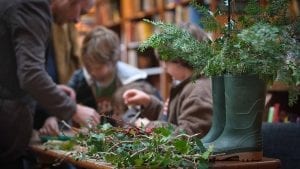 Now in its 18th year, the programme of talks (announced 16 October) will be the most ambitious yet, highlighting the world’s best new fiction, non-fiction and poetry. A new venue will double the festival’s seated capacity and further transform the town centre into a playground of ideas. Events will also begin a day earlier than previous years, with programmed talks and performances from Thursday 23 November.

Workshops for young people take inspiration from the festival’s #HAYTREES project, with tree- to-type printmaking, festival crafts and Forest School events, plus a host of engaging talks for all ages featuring the very best writers for young people.

The town’s atmospheric market square will be a focus of festivities:

On Friday 24 November, the Hay Christmas lights will be turned on, transforming the town into a winter wonderland brimming with festive cheer, accompanied by carol singing, readings and evening entertainment.

On Saturday 25 November, the Hay Food Festival celebrates all that’s good about winter cooking, with over 50 stalls showcasing the very best of local produce, from savoury to sweet.

On Sunday 26 November, Hay Does Vintage transforms the square into a festive outdoor fleamarket with over 50 vintage and retro traders offering a diverse collection of items from clothes, textiles and jewellery, to furniture, collectables, and kitchenalia.

Peter Florence, Director of Hay Festival, said: Hay Festival Winter Weekend is a chance to experience Hay as never before. There will be great writers, inspiring thinkers, and a thrilling bazaar of local crafts, foods and curiosities, wrapped in festive lights and glistening with winter cheer. Join us.

Clare Fry, Chair of Hay and District Chamber of Commerce, said: A number of spring and summer visitors to Hay ask what we do in the winter, presumably thinking we batten down the hatches, light the fire and close our doors.  This couldn’t be further from the truth. Hay is the market town that never sleeps and especially not at Christmas! This magical little place is extremely fortunate to have a seasonal cultural/literary explosion from Hay Festival not forgetting the festive markets and events encompassing the best of our local growers, producers, retailers, artists and more. Join us and even stay for a while, there are inns, hotels, BnBs, restaurants, bars aplenty and, when the festive-head needs to be cleared, take a brisk walk or bike-ride on the snow-capped Black Mountains or through the Wye Valley.

The full festival programme will be announced Monday 16 October, when tickets go on sale to Friends of Hay Festival. Tickets will be on general sale Thursday 19 October.

The project has been funded by the Welsh Government’s Tourism Product Innovation Fund which aims to encourage partnership working and innovative ideas which will have a greater impact and attract more visitors. 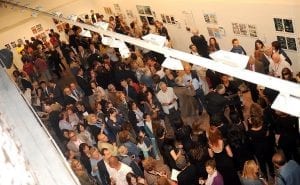 Hay Festival Segovia (16 – 24 September) welcomes over 100 writers and thinkers to around 70 events in Spain, tackling issues from the role of modern cities, to how we can respond better to the global challenges of our time, to the role of literature in reforming European institutions.

The first Hay Festival in Denmark, and first focussed exclusively on literature for young people, takes place 26 – 29 October. In an ambitious new project for European Capital of Culture Aarhus 2017, Denmark, Hay Festival launched the Aarhus 39 in March this year. A selection of 39 children’s and YA writers from all over Europe, aged 40 and under, are taking part in a new festival and feature in two new anthologies: Quest and Odyssey, which are out now.

Taking over the public library in Dokk1 – one of Aarhus’ exciting new development projects and winner of the best public library of 2016 – the international children’s literature festival will be free to enter and feature leading writers and illustrators alongside the Aarhus 39, including: Meg Rosoff, Cressida Cowell, Chris Riddell and Janne Teller.

The third edition of Hay Festival Arequipa (9 – 12 November) sees more than 100 writers and thinkers appear in events over four days. Plus, Hay Joven for students, Hay Festivalito for young people, and a series of events in Arequipa’s communities ensure that writers reach the broadest possible audiences.

A day of programming will take place for the first time in Cusco, the foremost city of the Inca Empire and the continent’s oldest continuously inhabited city, as the festival continues to grow its cultural reach in the country.

Dates for your diary…