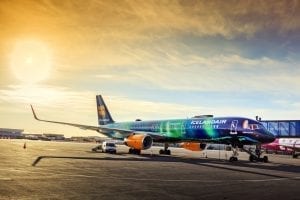 Icelandair recently announced two new gateways to the United States: Cleveland, Ohio and Dallas Fort Worth. The inaugural Cleveland flight will take place in May 2018, and will begin with four flights a week. Flights to Dallas Fort Worth (DFW) International Airport will begin on 30th May 2018 and will operate to their hub Keflavik four times per week with a Boeing 757-200 aircraft. Tickets will be available for purchase in the coming weeks.

Cleveland will be Icelandair’s 19th gateway in North America. Located on the shores of Lake Erie, Cleveland is known for art, basketball, and rock and roll. With a population of 2.2 million inhabitants, the city has a vast industrial history and is home to the Rock and Roll Hall of Fame. Sports enthusiasts will also recognize Cleveland’s basketball team, the Cavaliers, led by one of the brightest stars of the NBA, LeBron James.

“Cleveland is the perfect destination for our route network. We are happy to be the first carrier to provide service to Europe in eight years. This addition also strengthens our route network and bridges Europe and Cleveland together by providing direct service to Iceland in addition to quick and convenient connections to 30 destinations in Europe,” says Icelandair CEO Birkir Holm Gudnason.

The new routes will open up even more travel choices for UK passengers with connections from the existing seven UK gateways Icelandair serve via their hub in Reykjavik, which now serves 20 destinations in the US. Icelandair’s updated fleet also offers travellers more legroom, in-flight entertainment, and gate-to-gate Wi-Fi.

“As we celebrate our 80th anniversary, we are pleased to offer the largest route network in Icelandair’s history,” said Birkir Holm Gudnason, Icelandair CEO. “Our new service to Dallas Fort Worth will provide a refreshing alternative for UK travellers travelling to Texas with flights via Iceland. This new route will also open opportunities for Texan travellers who want to explore the 7 UK gateways we serve. We look forward to welcoming Dallas Fort Worth aboard our network.”

For additional information about Icelandair, current route network or fares to Iceland and beyond, please visit www.icelandair.co.uk.