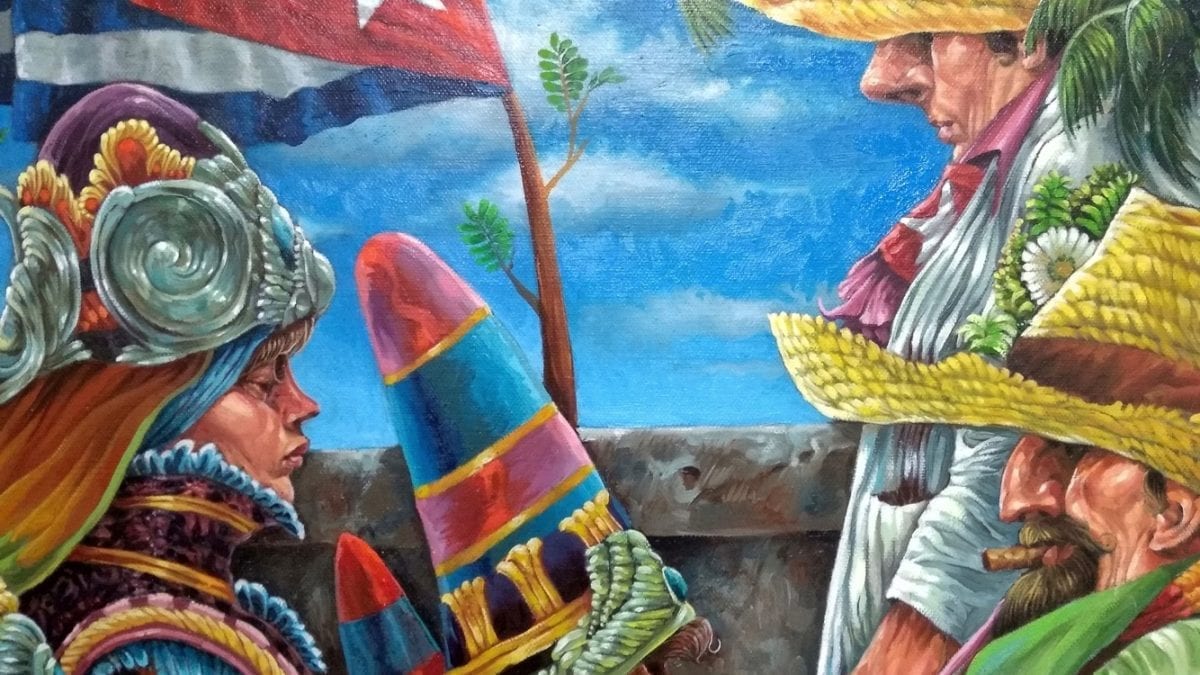 Located just 90 miles from Cuba, the island city of Key West in the Florida Keys shares a cultural connection with the Caribbean nation that dates back almost 190 years. The cultural link between Key West and Cuba is one of the most intriguing in all of American history.

For many visitors to Key West, a popular bucket list and ‘selfie’ stop is the city’s iconic Southernmost Point marker, because as the name suggests, its location marks the southernmost spot in the continental United States. Overlooking the Atlantic Ocean on Whitehead Street, the marker’s brightly-painted red, black and yellow body bears lettering that proclaims its distance from Cuba. Interestingly Key West is actually closer to Cuba than to the US mainland.

However, while the island nation of Cuba may be less than 100 miles away, there is plenty of rich Cuban heritage for visitors to explore during their time in Key West.

For those interested to learn how Spanish settlers came from Cuba to the Keys in small boats in search of freedom, the Mel Fisher Maritime Museum is currently running an exhibit titled ‘Cuban Rafters: With Little More Than the Shirts on Their Backs.’ Showcasing personal items – collected by Keys resident Dink Bruce – that Cuban balseros, or rafters, brought to the island chain on chugs (handmade boats) after treacherous journeys across the ocean to find freedom. The museum also displays the Mariana, a 21-foot makeshift vessel on which 24 Cubans journeyed from their homeland to Key West in 2015.

Nearby, history buffs might be interested to visit Mallory Square – home of the daily Sunset Celebration – to see where Cuban mariners and fishermen first camped on the northwest shore of the subtropical island before returning to Cuba with barrels full of food to sell in the bustling markets of Colonial Spanish Havana. Today, visitors can explore Mallory Square’s Cayo Hueso y Habana building, which is the site where thousands of Cuban refugees disembarked on American shores during the 19th century. Its modern-day design, inspired by the artwork of native son Mario Sanchez, represents old Key West and its Cuban heritage.

Back when Key West was still known by its Spanish name, Cayo Hueso, it quickly became the USA’s wealthiest city per capita due to its lucrative shipwreck salvage business, aided significantly too by the arrival of the cigar industry from Cuba. By the late 1800s, Key West was known as the cigar manufacturing capital of the world and was home to nearly 150 cigar factories. Workers in these factories, many of whom hailed from Cuba, made 100 million hand-rolled cigars annually. Visitors can recall the once-flourishing industry at the Gato Village Pocket Park, viewing the re-created façade and front porch of the cigar maker’s cottage that was built there in 1897, together with a cigar sculpture that is believed to be the world’s largest. Park signage tells the story of Gato Village, a unique community of workers’ cottages built around the Gato Cigar Factory, and the Gato family.

When the Cuban revolution began in 1868, revolutionary leader José Marti rallied significant support in Key West for Cuban independence from Spain. In 1871, the San Carlos Institute was founded on Duval Street to preserve Cuban culture and promote freedom – and it was from here that in 1892, Marti gave a historic speech promoting his ideals. The institute today operates as a free to enter museum, gallery and theatre. Visitors can also see a sculpture memorialising Marti at the city’s Bayview Park. Additionally, the Cuban Club, founded in 1900 to unite Key West’s Cuban community and offer education, medical care and recreation, still stands nearby on Duval and now features shops and lodging.

As well as culture, the Cuban community brought Key West some of its most interesting and unique foods. The Caribbean nation’s cuisine quickly became part of the island’s food heritage once Cuban families settled in the 1860s. Today, the savoury smells of ropa vieja, picadillo and other specialties like lime-kissed pork chops and fried plantains drift from the city’s many Cuban restaurants. Café con leche (Cuban coffee) and the traditional Cuban sandwich (a mix of meats and cheese on warmed and pressed Cuban bread) are two popular staples in Key West dining. Here are some not-to-be-missed Cuban cafés and eateries for visitors to add to their bucket list:

For more information on Cuban heritage in the Florida Keys, visit: www.fla-keys.co.uk