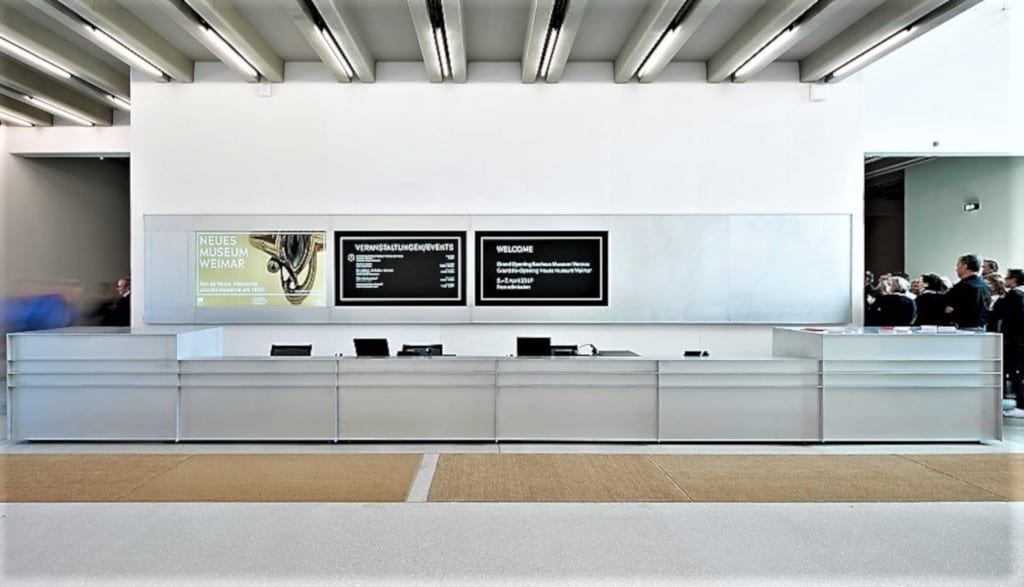 Not just the recent opening of the new Bauhaus Museum puts Weimar firmly on the map as a stand-out art and design destination. A new permanent modernism exhibition at Neues Museum plus the refurbished Haus am Horn as the first example of Bauhaus architecture make for an inspiring city break featuring immersive and hands-on museum experiences.

100 years after the Bauhaus school was founded in Weimar, the new Bauhaus Museum, designed by Berlin-based architect Heike Hanada and opened on 6 April, showcases around 1,000 highlights of the world’s oldest Bauhaus collection in its new permanent exhibition ‘The Bauhaus comes from Weimar’. The collection was established in 1925 by Bauhaus founder Walter Gropius with 168 workshop pieces and has over the years grown to 13,000 items. On three exhibition levels, visitors are now able to see some of the design movements most iconic pieces, including Wilhelm Wagenfeld’s and Carl Jakob Jucker’s table lamp, Marianne Brandt’s teapot or Marcel Breuer’s lattice chair as well as works by Paul Klee, Peter Keler and László Moholy- Nagy plus furniture by Mies van der Rohe.

Revolving around the highly topical question of ‘How do we want to live together’, the exhibition does not follow a chronological order but focuses on different topics, including: ‘The new man’, ‘The experiment’, ‘The stage’, ‘Modern life’ and ‘Failure? And what remains?’. In addition, the new Bauhaus Museum features regular temporary exhibitions and an extensive accompanying programme, also highlighting contemporary designers, artists and architects.

Interactive and immersive museum experiences
The new cube-shaped museum is also a platform for innovative museum visitor experiences that were developed collaboratively with various schools in the region. These include so-called ‘Bauhaus Actors’ as living and breathing information boards; every Saturday and Sunday from 12 pm to 4 pm, performers from a local youth theatre take on different characters throughout the museum, such as a newspaper reader, architecture student or photographer, and bring various aspects of the Bauhaus to live by telling stories and answering visitors’ questions. If you’re in a playful mood, try the specially developed, large-scale Bauhaus games “B-HOOPS” and “B-CUBES” in the museum’s public areas, inspired by the characteristic Bauhaus colours, form theories and balance exercises.

The museum’s design lab provides another hands-on experience, allowing visitors to work with various materials and digital media. On the first Thursday of every month, they can design their own works together with regional artists and use featured exhibits as inspiration to experiment with different materials and techniques.


Less than a five-minute walk away, neighbouring Neues Museum Weimar continues Weimar’s visionary design bonanza with a new permanent exhibition on ‘Van de Velde, Nietzsche and Modernism around 1900’ that was also opened on 6 April. Presenting paintings, sculptures and decorative pieces by international artists of Realism, Impressionism and Jugendstil, the displays are pegged on cultural leaders who lived in Weimar in the early 20th century, including Harry Graf Kessler, an Anglo-German patron of modern art, and Belgian architect and art nouveau icon Henry van de Velde. Equipped with playful and almost futuristic media elements, the museum traces the stylistic developments of modernism that led to the founding of the Bauhaus in Weimar. Like its Bauhaus Museum neighbour, it invites visitors to get stuck in, with a Workshop Café where guests can not only enjoy cakes but also test their own design skills and produce hand-crafted pieces, e.g., in bookbinding and woodworking.

For pure Bauhaus architecture, look no further than Haus am Horn in Weimar, which is widely regarded as the prototype for modern living and was the first residential building to bring the Bauhaus’ revolutionary ideas to life. Built for the first major Bauhaus exhibition in 1923, all the furniture was designed and produced in the Bauhaus workshops by Bauhaus students, such as Marcel Breuer, Theodor Bogler and Alma Siedhoff-Buscher. After extensive renovation to return it to its original appearance, Haus am Horn will reopen on 18 May to celebrate the 100th anniversary of the Bauhaus and invites visitors to experience its history and design features. Coinciding with the reopening, Bauhaus Museum Weimar will stage a ‘Modern Life’ presentation, exploring new technologies, the new role of women and new materials of the 1920s.

While in the Weimar, why not take advantage of the wonderful castles in the area. Read: 10 Castles to Visit in Saxony Thuringa.

Travel information for your Weimar art and design trip

Many major airlines fly to Frankfurt, from there journey on the frequent and fast ICE high-speed rail connections to the Thuringian capital Erfurt. You can either book your accommodation in Erfurt and hop over to Weimar by public transport – it’s a 12-minute train ride on local services running throughout the day. Or stay in Weimar and spend some time exploring Erfurt’s mediaeval beauty. Either way, it’s a two-in-one city break.

Find the best deals on flights and hotels in Frankfurt and Weimar using our comparison engine, which scans all the major booking sites.

General information
For more ideas on what to do on your Weimar trip. visit Thuringia Tourism, www.thuringia-tourism.com, part of the Cultural Heart of Germany, www.cultural-heart-of-germany.com, a tourism initiative of Saxony Tourism and Thuringia Tourism. Cover photo, © heike hanada laboratory of art and architecture 2019.

Slow Travel Guide to the Isle of Wight