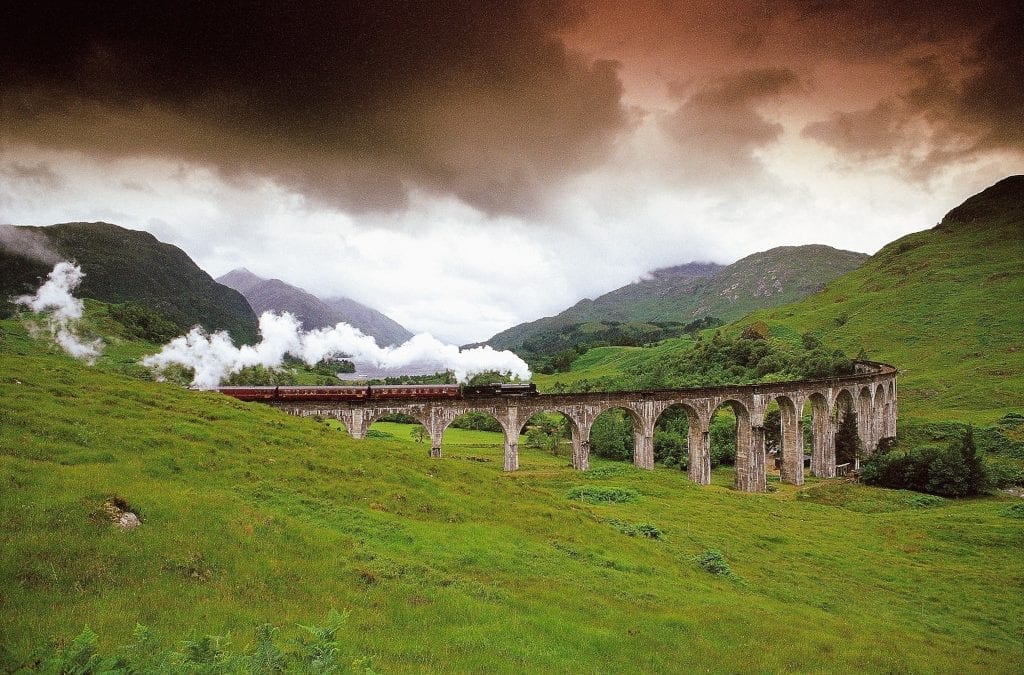 Burns Night, or Burns Supper, is held on or around Robert Burns’ birthday, the 25th January each year. The memorial supper was first arranged by his close friends, but has since morphed into a countrywide event, celebrating Scotland’s distinctive culture and heritage.  The evening is traditionally celebrated with Scottish fare, folk music and recitals of the National Poet of Scotland’s work.

Scotland is home to some of the most historic and most picturesque railway lines in the world. Great Rail Journeys have picked out the top Scottish tours in their portfolio for 2019:

Castles and Wildlife of Scotland

The historic landscape of Scotland is replete with castles, and while the larger cities such as Edinburgh offer the bigger and more famous examples, for an authentic experience visitors should head to the north of the country. Not only will you find iconic castles such as the Eilean Donan Castle, which featured in the film Highlander, and the stately Dunrobin Castle, seat of the Earl of Sutherland, but there is also some spectacular wildlife. Red squirrels and Scottish wild cats roam the Alladale Wilderness Reserve, while dolphins can be spotted along the Moray Firth.

An ideal tour for small groups, Castles and Wildlife of Scotland by Great Rail Journeys provides the perfect blend of history and nature. The tour includes a stay at Tulloch Castle as well as visits to Eilean Donan Castle and Dunrobin Castle, plus time to explore the Alladale Wilderness Reserve. Rail highlights are the journey both ways on the Caledonian Sleeper Train, which can be boarded in London, Crewe or Preston, and the included excursion along the magnificently scenic Kyle Line between Inverness and Kyle of Lochalsh. Tour information: 7 days from £1,495.

Enchanting Autumn Colours of the Highlands

The autumn colours in Scotland are a favourite seasonal sight. The Highland’s most wonderful scenes and castles become a colourful wonder that bewitch the eye. Getting out into the countryside via scenic railways gives some of the most incredible views. Knotted trees and atmospheric bridges in the Enchanted Forest are illuminated in a myriad of colours, this autumn only event will dazzle guests.

You can visit the Enchanted Forest during the Enchanting Autumn Colours of the Highlands tour. More of the incredible autumn colours are seen on journeys on the Strathspey Steam Railway and the Cairngorm Mountain Railway, which is Britain’s only funicular railway. As you ascend the mountain, the glory of the Cairngorms National Park is unveiled. After the time outside exploring the colours of autumn you can warm up with a whiskey tasting at the Glen Ord Distillery. Tour information: 6 days from £695 per person.

The scenery of the highlands can be explored by historic trains and canals, from mountains to lochs the folklore of Scotland Is prominent.  Loch Ness, in particular, holds a prominent position in Scottish folklore as the home of the fabled Loch Ness Monster.  While Loch Ness is the second largest lake in Scotland by area after Loch Lomond, its tremendous depth means it is the largest by volume in the entire British Isles. Loch Ness lies approximately 23 miles southwest of Inverness, the northernmost city in Britain. Inverness has considerable historic and cultural significance, made all the more famous by Shakespeare’s Macbeth.

You can visit both Loch Ness and Inverness as part of Great Rail Journeys’ Edinburgh, the Jacobite Steam Train and Scottish Islands and Lochs Cruise. Beginning in Edinburgh, the journey boards takes in the historic scenery on the West Highland Line, on which guests will journey on the Jacobite. One of the most iconic sights on the line is the Glenfinnan Viaduct, which blends wonderfully with the surrounding hills and valleys. This well known viaduct was used in the Harry Potter films. After this incredible rail journey you will join the MV Lord of the Glens for a cruise to Skye, Eigg and up the Caledonian Canal, including tackling the incredible feat of engineering that is Neptune’s Staircase, before crossing the beautiful waters of Loch Ness. Tour information: 13 days from £2,695.

Some of Britain’s most attractive islands are to be found in Scotland and the Hebrides off the west coast of Scotland are a fine example of peace, tranquillity and natural beauty. With plenty of castles and legends, plus distinctive wildlife there’s a unique experience to be had. Fingal’s Cave on Staffa is a unique sea cave in the Hebrides, formed completely by hexagonally jointed basalt. The remarkable symmetry of this 227 foot cavern, and the myth that accompanies the cave, has a profound effect on each visitor.

Visit this mystic cavern on Great Rail Journeys’ Western Highlands & the Hebrides tour. Explore the Isle of Mull, with an exploration of Duart Castle, the historic seat of Clan Maclean. Then have the chance to spot minke whales and dolphins on a wildlife spotting cruise that takes you to Staffa and Iona. You will also taste the distinctive Oban whiskey at the distillery that predates the town of Oban. Tour information: 9 days from £1,375 per person.

The Grand Tour of Scotland

For the full Scottish experience, from its majestic cities to its magnificent and diverse castles via a plethora of stunning landscapes, take The Grand Tour of Scotland with Great Rail Journeys. The tour takes in Scotland’s awe-inspiring capital Edinburgh, with a visit to the Royal Yacht Britannia, as well as stops at Fort William, the Isle of Skye, Loch Ness, St Andrews and Dundee. Train highlights on this holiday include a trip on a Jacobite Steam Train and a ride along the West Highland Line, widely regarded as one of the most scenic and enjoyable train journeys in the world.

If castles are your thing, this really is the tour for you, with the opportunity to visit six fantastic forts. Edinburgh Castle offers glorious views over one of Britain’s prettiest cities as well as being home to the Scottish crown jewels, while Stirling Castle was the site of many famous coronations of Scottish monarchs including Mary, Queen of Scots. On the Isle of Skye lies Dunvegan Castle, the oldest continually inhabited castle in Scotland and seat of the MacLeod clan, and Armadale Castle and Gardens with its 20,000 acre estate, home to roe deer and golden eagles. Passengers will witness the delightful Eilean Donan Castle, which sits on a tiny island in the middle of Loch Duich, while the final castle on the tour is Glamis Castle in Angus, the childhood home of the Queen Mother. Tour information: 10 days from £2,495 per person.