Greener Pastures, sustainable tour operator based in North-East India have expanded their portfolio to include small group touring. The first tour is ​The Tawang Festival Group Tour​, taking eight adventurers to the remote region of Arunachal Pradesh. The 10-day all-inclusive journey departs on October 22 2017.

Organised by the state tourism department, the Tawang Festival is a gathering to celebrate the truly fascinating cultural diversity of Arunachal Pradesh, a land of raw nature and inspiring landscapes where numerous tribes live peacefully. Promoting this rich heritage, the event is filled with activities, such as dances, prayers, arts, crafts, sports, films, food and workshops.

​Beyond the festival, visitors will be mesmerised by the pristine landscapes of Arunachal Pradesh and its cloud forested mountains and crystal lakes. Connections will be made with the simple lives of mountain people – in serene village walks, in local livelihoods and by staying in the cosy mountain home of a local.

​​​​​Vaivhav Todi, managing director said “We’re very excited to introduce this first of what will be several small group tours to our customers. Our expert guide Bamin Baro is native to the region from the fascinating Apatani tribe, and will use his 15 years of experience to give our guests a truly authentic, immersive insider view of the life and culture of Arunachal Pradesh.” 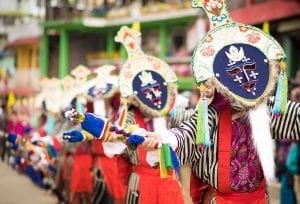 “The austere serenity of Shangri-La.” describes James Hilton in his 1933 novel, Lost Horizon, allured by a land of milk and honey in a hidden valley in the Himalayas. Over the years, this has led edgy explorers to venture deep in the Himalayas, scouting valleys after another, finding their own perceptions of a paradise on earth. For some, this search brings them to Arunachal Pradesh.

Arunachal Pradesh, due to the state’s eastern most location in the map of India, is called “the land of dawn-lit mountains”. The entire terra firma falls under the eastern Himalayan landscape, a land of supreme natural beauty and rich ancient traditions. The altitudinal and climatic variation of the state results in a variety of landscapes and forests which harbor one of the planet’s last great biodiversity.

In the sense of topography and ethnicity, Arunachal Pradesh feels like an entire world of its own. Nine large Himalayan rivers flow through the state on their course to the plains of Assam, including the mighty Brahmaputra. Each of these rivers and their tributaries form spectacular valleys which remain disconnected from each other and to the outer world, due to very poor infrastructure and densely forested mountainous terrain which is hard to conquer. Even today, many villagers in the state have to trek for days to reach the nearest grocery shop. This separation due to geographical extremities has ensured the preservation of a great diversity of ages old cultures, flora and fauna found in the nine river systems. Astoundingly, in a single state as small as Arunachal Pradesh, about 90 different languages are spoken. There are 26 major tribes and over 100 sub-tribes who live here and trace their indigenous history to faraway places in Mongolia and Southeast Asia. Arunachal Pradesh is definitely the wildest frontier of India.

The area of the district is approximately 2085 sq. km. bordered by Tibet in the North and  Bhutan in the South-West. The Sela ranges separate West Kameng district in the East where elevations range between 6,000 to 22,000 feet (6,700 m). Inhabitants are found at lower altitude, where they enjoy a cool temperate climate. Tawang is located 183 Kms from Bomdila at an altitude of 3500 metres above sea level. The natural beauty and solitude of Gudpi and Chong-Chugmi ranges, Tawang chu River and Tawang valley are mesmerizing. The inhabitants of the districts are all of the Monpa tribes, with the exception of  Shyo village which is dominated by people of Tibetan origin.

There are many beautiful glacial lakes in and around Tawang with crystal blue waters such as Sela lake, P.T.Tso lake, Sangetser lake, Banggachang lake and many more. These remain frozen in winter while in summer they becomea  haven for migratory birds.

Greener Pastures is a small sustainable travel company based in Northeast India which promotes responsible tours and adventures to exotic places, with a prime focus on uplifting local communities and safeguarding the environment. ​Founded in 2011 by director Vaihav Todi, Greener Pastures tailor-make authentic and immersive experiences across the vast and exotic frontiers of north-eastern India which are eco-friendly, benefit the communities and are specialised to ensure that travellers take back lifelong memories.

Christmas in the Maldives

Kick a Sledge in Norway