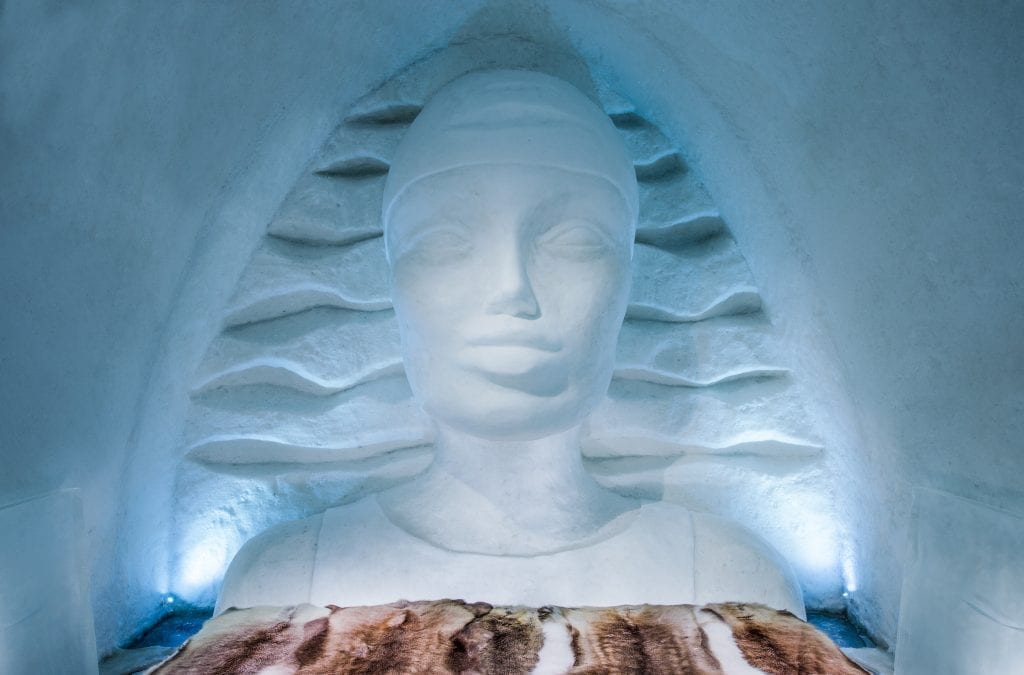 A candy shop filled with giant sweets, a bathing ice woman, a vintage VW camper and a flock of Arctic terns – the first look at the suites of the 29th Icehotel revealed. The iconic Icehotel in Swedish Lapland opened for another winter season on 14 December. As well as uniquely designed art suites, the hotel features an ice bar, an ice ceremony hall and an exciting new chef’s table dining experience.

In total, 34 artists from 13 countries have spent an intense couple of weeks in Jukkasjärvi, creating create the 29th annual incarnation of the ephemeral hotel that is entirely made out of ice and snow from the free-flowing Torne River.

“It was a challenge for the  jury to choose the 15 winning designs but we are very happy with our selection. This winter our guests can enter an amazing wonderland and explore everything from the deep sea to forests and incredible skies. Every winter I say that this is the best Icehotel so far, but this year it definitely is.” says Arne Bergh, Creative Director at Icehotel.

“The suite is inspired by the climate changes and the over-fishing that affects our oceans. I also thought the idea of using frozen water from a river in northern Sweden to create an ocean with shells, fish, and corals is exciting,” says Jonathan Paul Green.

Other designs include “Spruce Woods” by Christopher Pancoe and Jennie O’Keefe from Canada which allows guests to sit around a fire (of ice) in a forest camping site adjacent to a vintage VW camper van, ‘Flock’ by Lisa Lindqvist and Ulrika Tallving, a UK and Swedish team, as well as ‘Haven’ representing a magical portal of ice guarded by the clever fox and fiery phoenix, created by artists Jonan Johansson, Jordi Claramunt and Lukas Petko from Sweden, Spain and Slovenia. Other designs include the icy Aurora Borealis and a room bursting with frozen flower blossom.

Building the seasonal hotel requires a large amount of work, beginning in March each year when 2,500 tons of ice is harvested from the Torne River. The ice is then stored until October, when the building starts.

The weekend also saw the operation of Discover the World’s first exclusive #IceFlight of the year, the first of eleven return flights which operate between London Heathrow and Kiruna until March 2019, making the Icehotel accessible in just over three hours from the UK. The price for a three-night break starts from £1,073pp* including return flights.

A stay at the Icehotel offers the chance to combine sleeping ‘on ice’ in one of these unique suites with various northern light excursions and Arctic adventures including husky sledding, ice sculpting, winter skills survival classes, snowmobiling, reindeer sleigh rides, Northern Lights photography classes and wilderness dinners. What is more, new bookers (by 14 January 2019) can save up to £150 per person (10% discount) if travelling in December and January on Discover the World’s direct flight.

A ’classic’ three night Icehotel Break is now available from £1,073pp based on two sharing (two nights in a warm Kaamos room and one in an Ice Room) on a B&B basis including return direct flights between London Heathrow and Kiruna, return airport transfers. Excursions can be added at an additional cost.

Christmas Break- 3x nights (departing on 23 December 2018) are now available from £1,127pp (was £1,240pp) based on two sharing on a B&B basis including 2x nights in a warm room and 1x night in an Ice Room with return direct flights and transfers. www.discover-the-world.com/holidays/christmas-at-the-icehotel

New Year Break- 4x nights (departing on 29 December 2018) are now available from £1,501pp (was £1,645pp) based on two sharing on a B&B basis including 3x nights in a warm room and 1x night in an Ice Room with return direct flights, airport transfers and a special NYE dinner. www.discover-the-world.com/holidays/new-year-at-the-icehotel

Discover the World’s Icehotel travel collection also offers the chance to combine a stay at the Icehotel with an exclusive overnight in Abisko National Park, one of the best places in the world to experience the northern lights, as well as Norway and further afield to Iceland.