After visiting The World’s 50 Best Restaurants Awards in Antwerp, Mark Bibby Jackson stops off at the delightful and intimate city of Mechelen in Flanders. 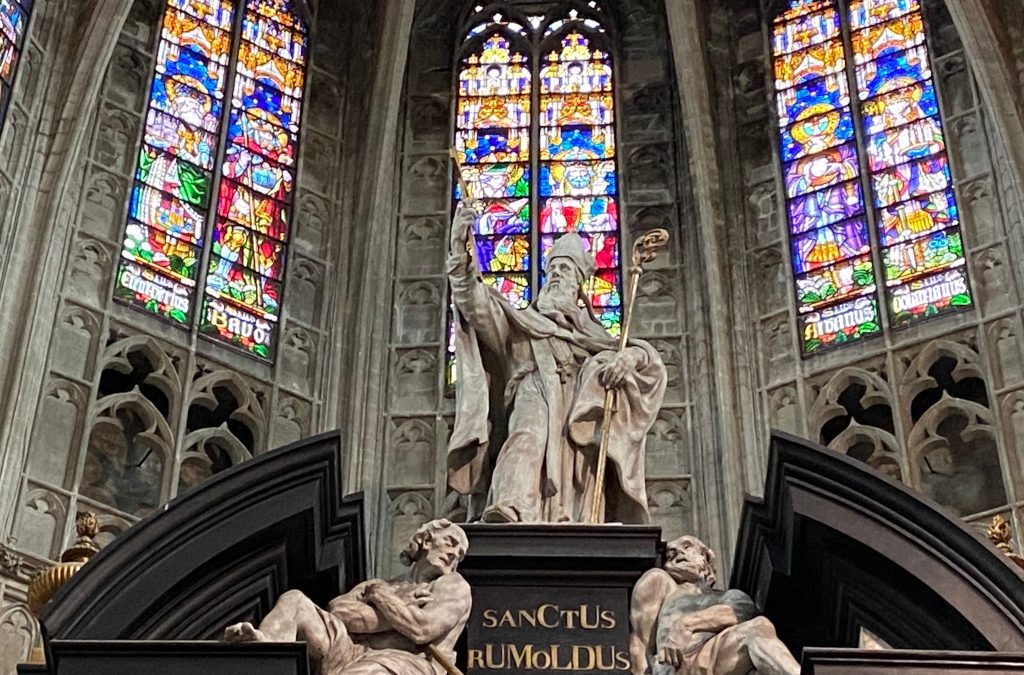 After visiting The World’s 50 Best Restaurants Awards in Antwerp, Mark Bibby Jackson stops off at the delightful and intimate city of Mechelen in Flanders.

Sandwiched between the twin Flemish cities of Antwerp and Brussels it would be easy to overlook Mechelen. I should know for on the first day of my visit I found myself on the skywalk at the top of St Rumbold’s Tower looking down upon the city and across the surrounding countryside.

The view across the flat open countryside of Flanders is quite remarkable. To the north lies Antwerp with smoke rising from its docks, to the south is the Belgian capital with its iconic Atomium building. Or at least I am promised it is there somewhere beneath the clouds. Beneath me are just the 538 steps that lead up to the top of the 16th century clock tower – now why was Mr Otis so reticent in inventing the lift?

As I am about to descend a white dove comes to join me, looks cautiously into the depths below and then plunges. I decide to take the stairs. On the way up I had taken time to examine the chamber that contains the ancient clockwork and the 18th century drum, as the wind whistled louder the higher I climbed. Descending, I just wanted to be back on terra firma as quickly as possible – I’ve never been one for great heights. The man in the ticket office had explained that the mechanics of the bell tower are as impressive as the view – he was wrong. The views are more than worth the effort of the ascent, the mechanics are not.

Climbing St Rumbold’s Tower was both literally and metaphorically the high spot of my brief sojourn in Mechelen, although the town really is a medieval Flemish gem.

St Rumbold’s Cathedral is one of several religious buildings of note in Mechelen. The first I encounter is directly opposite the lovely little Muske Pitter hotel where I am staying. The Baroque Basilica of Our Lady of Hanswijk also dates back to the 16th century. Its altar was designed by Lucas Faydherbe, who designed the altar in the cathedral, in 1663.

Hanswijk lies just across river Dyle (or Dijle) from the centre of Mechelen. From here I walk across the Fountain bridge that was built in 1371 – although the current bridge owes itself to eighteenth and nineteenth century remodelling – to the pedestrianised Bruul shopping street. My second holy stop is halfway along the Bruul at the Church of Our Lady of Leliendaal, a Baroque monastic church that was built between 1662 and 1670.

Such virtuous behaviour had worked up an appetite. I took my lunch at De Vleeshalle, the Old Meat Market built in 1881 that had been converted into a food and shopping hall.

The atmosphere was pretty cool and relaxed, a bit like a mini-Spitalfields without the crowds. After eating so much during my stay in Antwerp attending The World’s 50 Best Restaurants Awards, I decided to try some tapas. The octopus salad was really good although understandably not quite up to the 50 Best.

After lunch I visited the former home of Hieronymous van Busleyden that has been turned into a museum.

Mechelen’s heyday was from 1490-1530 when it was de facto capital of Burgundian Netherlands. Margaret of Austria, daughter of Emperor Maximilian and aunt of Charles V, moved the court here in 1507, becoming regent two years later. A section of the museum is devoted to her.

Erasmus, Thomas More and other prominent thinkers of the time would come to the house to discuss ideas and no doubt reflect upon the likely impact of Brexit.

The museum has an interesting room containing murals dating back to 1515, as well as a magnificent painting of the inaugural seating of Parliament. For me, the star attraction lies at the very top of the museum, where there are a series of Enclosed Gardens. These are small altarpieces that resemble a heavenly garden, created by nuns between 1500 and 1550. It is not known exactly who created the individual gardens but their fine detail is certainly a work of beauty.

However, in reality the main attraction of the museum is the building itself, which was reopened in 2018 after loving restoration. After the museum I wondered back through town to my hotel, pausing only briefly for my 538-step climb up the stairway to heaven.

A Fish Supper on the Vismarkt

In the evening, I crossed back over the river to the Vismarkt, the old fish market, which has been transformed into a buzzing culinary centre. Fish has been traded at the Vismarkt since 1531 when Margaret of Austria banned it from being sold on the main IJzerenleen street due to its rank smell. Now the Vismarkt is a vibrant area full of bars, pubs and restaurants.

Having experienced so much fine dining in Antwerp I really wanted to experience something quintessentially Belgian for dinner. Fortunately, De Cirque restaurant had something to fit the bill. The shrimp croquettes were excellent, and perfect washed down with a glass of Carolus classic brewed right here in Mechelen.

As I was in a fish market I decided to follow this with a bouillabaisse, despite us being many miles from Marseille. It was equally as good as the croquette and the equivalent of anything you might find in the south of France. Also there was sufficient fish and seafood to satisfy two people which was a pity as I was dining alone. Fortunately the service from Jonas was excellent and the casual informality of the place allowed me to take sufficient time to do my dish justice.

Leaving the restaurant I felt tempted to sample some beers in the buzzing and popular Bar Popular, only I feared I might end up the way of Mr Creosote in Monty Python’s Meaning of Life so decided to head back to my hotel.

After the excess of the night before, it was fortuitous that my final day was to be spent following various walking tours around Mechelen. However, I had one more treat in store before I departed.

I emerged downstairs at Muske Pitter to discover that my host Loc had covered my table with the most expansive individual breakfast buffet I had ever seen. This I consumed as best I could with Mozart’s Don Giovanni playing in the background while I stared across the road to the Basilica of Our Lady of Hanswijk. It was a rather mystical experience.

As I had already experienced many of the attractions of the walking tour that follows the Footsteps of Margaret, the previous day, I decided instead to go for a walk on the Dylepath. To reach this I first crossed the river and walked thought the Botanical Gardens. These used to be part of an estate belonging to Teutonic Knights but were converted into a English style landscaped park in the nineteenth century.

The gardens end beside the river close to the Fountain Bridge from where I could join the Dylepath. This is a wooden walkway hovering above the river. Walking on it felt just like strolling along the Regents Canal in London only without the joggers and cyclists. It was interesting to look at the mix of new and old architectural styles and how people have treated their property.

I broke off my riverside walk to visit the Church of Our Lady Across the River Dyle. The Gothic church is the second largest in the city. Twenty eight trade guilds have altars here, inside is The Miraculous Draft of Fishes by Peter Paul Reubens, which is currently being conserved and is protected. The church’s stain glass is unusual and very contemporary. Like all the churches in Mechelen, it only opens at 1pm, so it was closed during my walk, although I returned later on in the afternoon on my way to the station.

The short walkway finishes opposite the Vijsmarket where I had dinner the previous evening. Opposite this is a statue of a young Beethoven holding a golden rose. This is one of many distinctive statues across the city.

Crossing the bridge I head back towards the centre passing the Cells Almshouses that provided accommodation for women in need from 1853-4 to 1973. The statues of women dancing naked in the gardens without a care in the world are striking.

My next destination is Mechelen’s beguinage, which has received Unesco World Heritage status, just like St Rumbold’s Tower and the belfry of the town hall, both of which are on the wonderful Grote Markt.

I first discovered beguinages on a visit to Kortrijk. These were founded during the Crusades when many wealthy widows were looking for a place to stay. The beguinages became female self-help communities but unlike in normal convents there was no vow of poverty thus at their height they became very wealthy.

Mechelen’s last beguinage survived until 1993. I started my stroll beside the Refuge of the Abbey of St-Truiden, passing the beautiful gardens at Refuge of Tongerlo Abbey. Across the road is a small beguinage where people lived from 1256 and a small park.

Wandering around these tiny streets is a very peaceful experience and one I recommend you do without map or aim, just follow your nose.

Just beneath the 17th century Beguinage Church, at the bottom of Krankenstraat is the Het Anker brewery. The beguines brewed beer here from 1369, although they only received a royal charter from Charles the Bold in 1471. This makes it the oldest existing brewery in Flanders. It was bought by the Van Breedam family in 1872, and renamed Het Anker in 1904.

The brewery has a delightful garden, as well as a bar and restaurant set over three floors. After such exercise I felt I deserved a drink. In 2012, Gouden (Golden) Carolus classic was voted the best dark ale in the world. Who am I to disagree? Certainly the one I sampled at the brewery was the best I tried during my brief stay in Mechelen. Apparently, they change the beer every day which is why it tastes so good.

With time running short before my train back to London, I had sufficient time to return to the magnificent Grote Markt, before my last visit.

A youthful Anne Boleyn used to play in the gardens of the Palace of Margaret of Austria before her unsuccessful marriage to Henry VIII. Sadly the Palace itself is closed but you can just imagine the future queen of England playing in the open gardens as a child. Fortunately my trip to Mechelen did not end as tragically as Anne Boleyn’s life, and I was able to return to Brussels in plenty of time to catch my Eurostar back to London without losing my head.

For more information on Mechelen

For ideas of things to do in Mechelen, click here, or for Flanders, visitflanders.com.