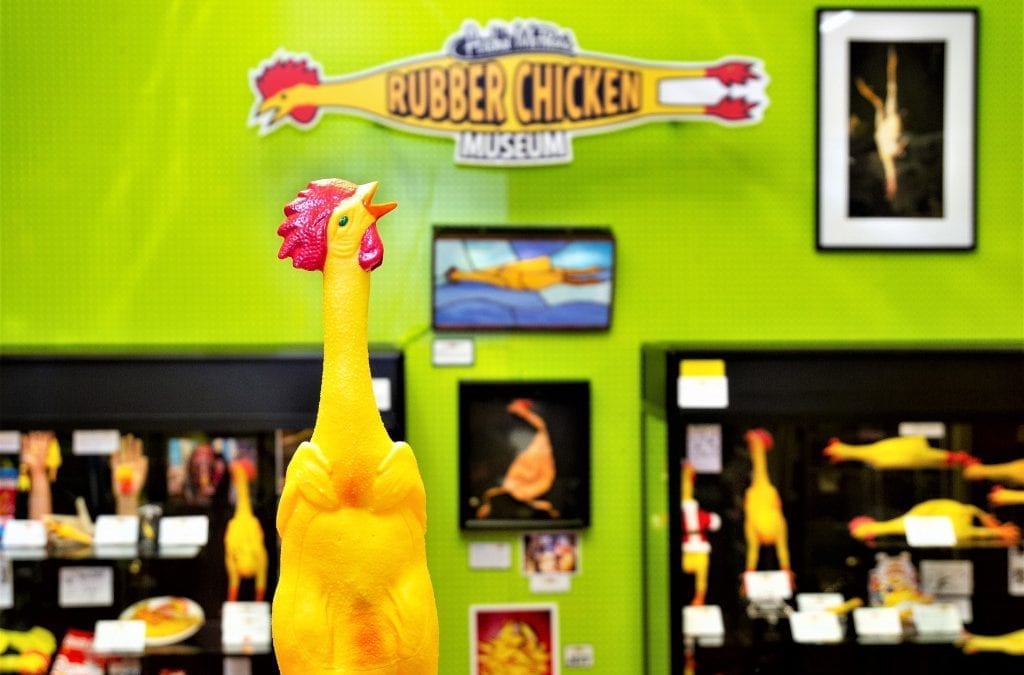 12 Weird and Wonderful Attractions for 2019

The Statue of Liberty and the White House may be some of the most well-known landmarks in the world, but the US is a strange place and we’ve got the facts to prove it. From a rubber chicken museum in Seattle to a Banana Museum in Mecca, California, check out below some of the world’s most weird and wonderful attractions.

Paying homage to plastic poultry and its status as a classic comedy staple, the Rubber Chicken Museum (see cover photo) features dozens of yellow rubber chickens, including the world’s largest and the world’s smallest. The museum is one-of-a-kind and located inside the Archie McPhee novelty store in northern Seattle, where visitors can also purchase toys, fancy dress costumes and sweets.

The self-titled Bishop Castle is the creation of Jim Bishop, a local man who embarked on building a cosy cabin but instead created one of the most unique attractions in Colorado. Taking almost 60 years to complete, Bishop Castle is an impressive structure that stands at 160 feet and comes complete with turrets, stained glass windows and a large dragon head. Travellers can visit Bishop Castle all year round and couples can also get married there. 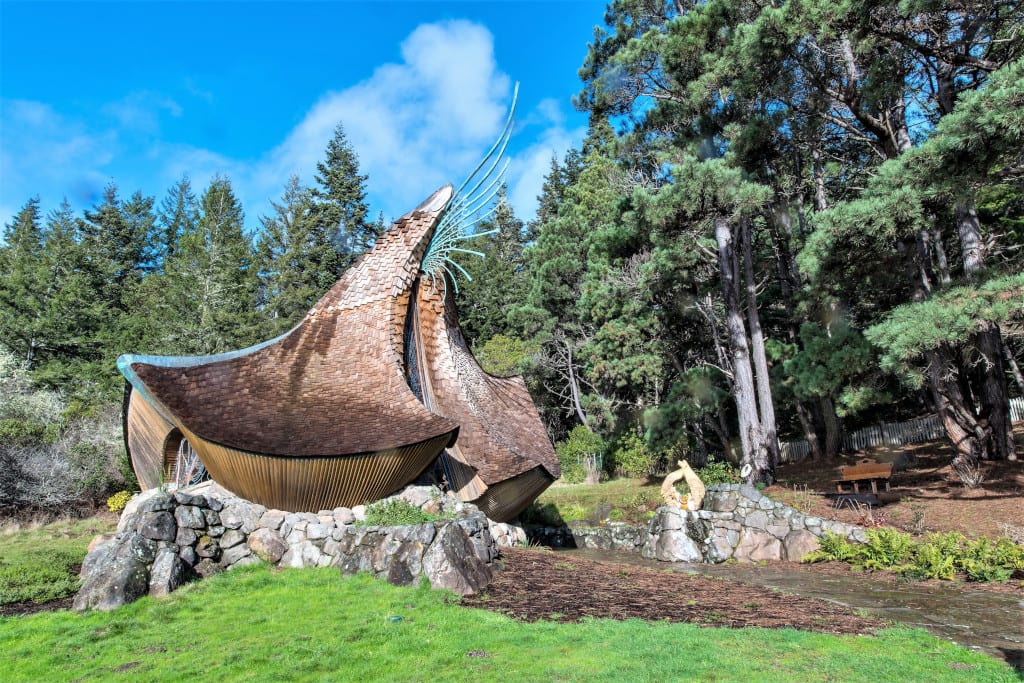 The Sea Ranch, a privately owned community extending for 10 miles along a beautiful strip of Sonoma’s far northern coast, is known for its panoramic views of sea, sky, rocky ocean outcrops, and migrating whales. The Sea Ranch Chapel is a stunning architectural gem—a non-denominational chapel topped by a winged roof that seems set to take flight – which amazes visitors both inside and out. The copper-accented roof is made of cedar shingles that conform to the winged shape, whilst inside visitors will discover hand-carved redwood benches, a sculptured ceiling embedded with sea shells and sea urchins, bright-coloured stained glass windows, and mosaics.

Situated in the picturesque region of La Jolla, The Cave Store appears as an unassuming beach shop, selling everything from snorkelling gear to watercolour paintings. But venture further and the store has a secret entrance which leads to Sunny Jim Cave, a hidden alcove over the ocean. Dating back to the early 1900s, the cave was originally used during Prohibition to smuggle alcohol into San Diego. It’s now home to an array of seabirds and is one of the city’s hidden gems. 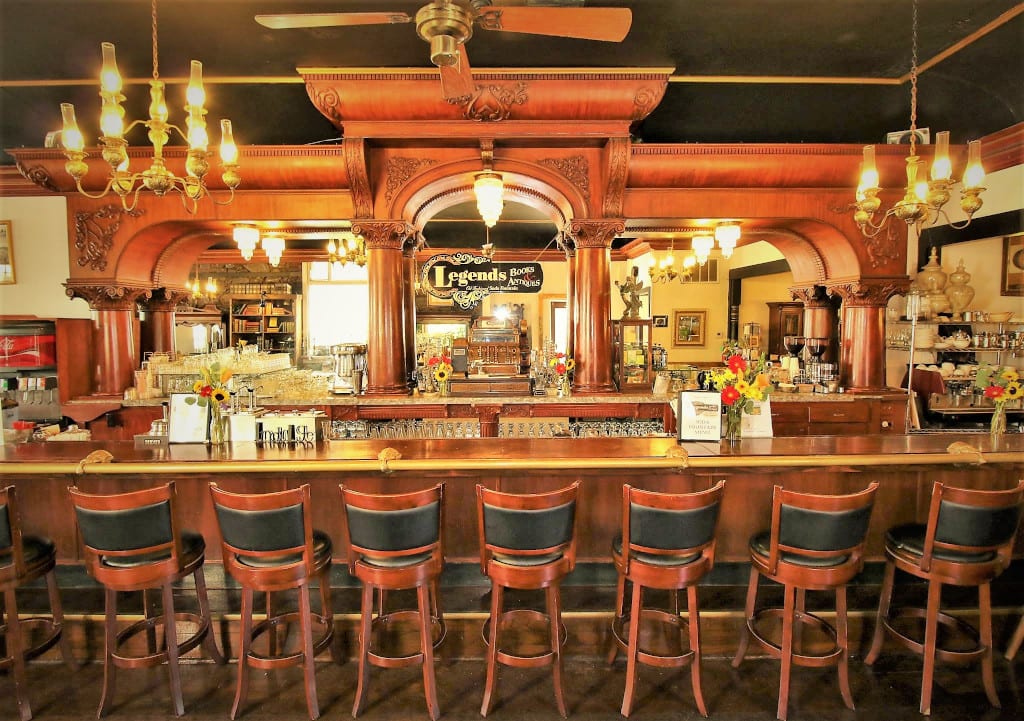 A cosy bookstore tucked away within an old gold mine shaft beneath the cafe and ice cream shop, Legends Books, Antiques & Soda Fountain has transformed part of an old mine shaft and underground tunnel snaking beneath the surface of Sonora. What was once a general store and bank is now a lively cafe and soda shop, with a quaint bookstore tucked below. Visitors can grab a coffee or ice cream float from the cafe upstairs then head down into the old gold mine shaft below, where they can browse the shelves of books lining the walls.

At 24 inches in diameter, Mills End is the world’s smallest dedicated park. Located in the median of Southwest Naito Parkway at Taylor Street, its story began when a journalist for the Oregon Journal, Dick Fagan, got tired of looking at the ugly pothole below his ofﬁce window. He decided to plant ﬂowers in the hole and name it Mill Ends Park. To generate interest in this tiny green space, Fagan centred newspaper stories on the capers of a ﬁctitious park resident, a leprechaun named Patrick O’Toole. 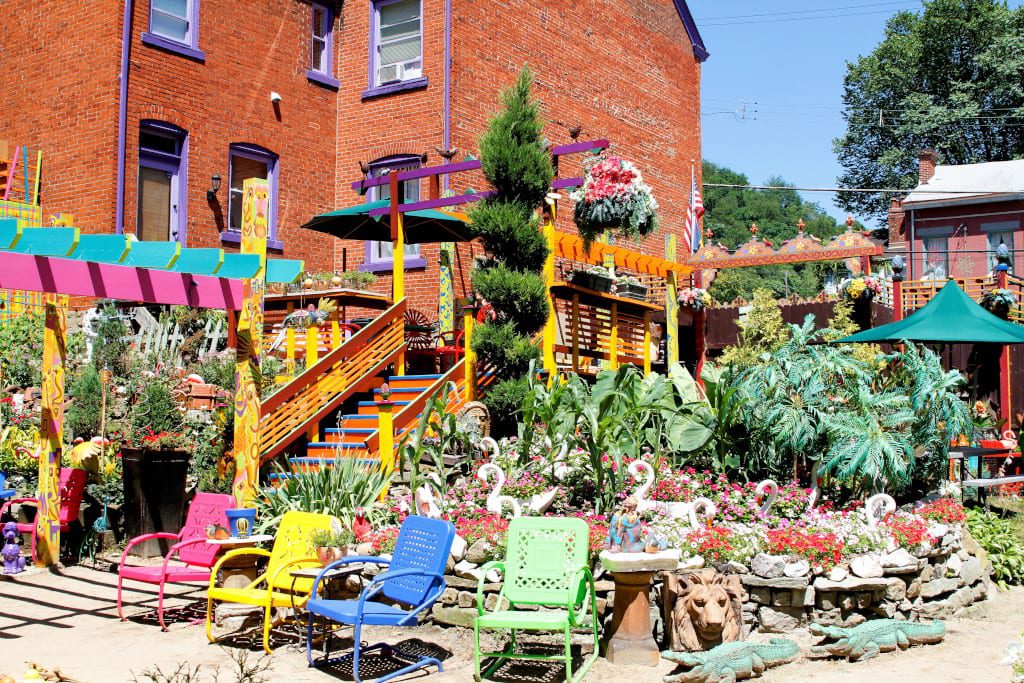 Randyland is an exuberantly colourful landmark located in the Central Northside of Pittsburgh. It’s a free outdoor art museum that opened over 20 years ago and has become a treasured community landmark ever since. Folk artist and resident Randy Gilson fills the area with vividly coloured, upbeat murals and objects, and has turned this Pittsburgh neighbourhood into a psychedelic dream.

A “gravitational anomaly” located in the redwood forests just outside of Santa Cruz, the Mystery Spot discovered in 1939, is centred around a shack that appears to be falling over, pulled down by the strange gravitational forces. The laws of physics are questioned as visitors can lean forward Michael Jackson-style against gravity. Speculation as to the cause include cones of metal secretly buried in the ground by aliens, carbon dioxide permeating from the earth, a magma vortex and in “scientific terms,” the highest dielectric bio-cosmic radiation known anywhere in the world.

Located just outside of Greater Palm Springs, Salvation Mountain is a unique work of art by local resident Leonard Knight. The man-made mountain is Leonard’s tribute to God and uses random materials, such as painted cement, hay bales, telephone poles and car windows, to create an intricate hill standing at 50 feet tall. The words ‘God is love’ are adorned at the peak and locals regularly help refresh the paint so the mountain is continuously bold and striking. 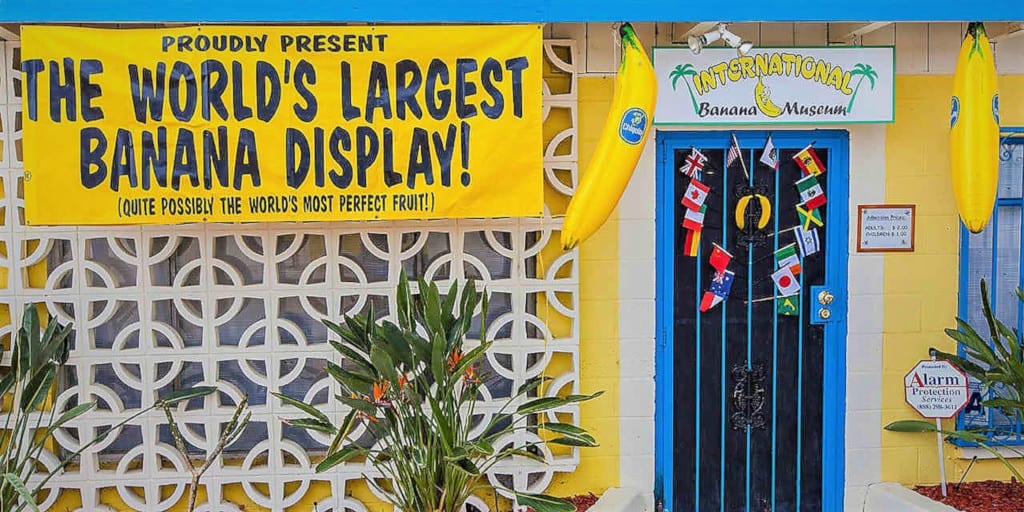 Home to 20,000 banana-themed items, the International Banana Museum is the world’s largest museum dedicated to the fruit. Owner Fred Garbutt’s collection includes banana-themed gadgets and gizmos—from harmonicas and squirt guns to a “Go Bananas” slot machine and a road crossing signs for banana slugs. For an a-peeling treat, visitors are invited to take a seat on a yellow barstool and slurp a banana milkshake, chow down on banana bread, or split a banana split.