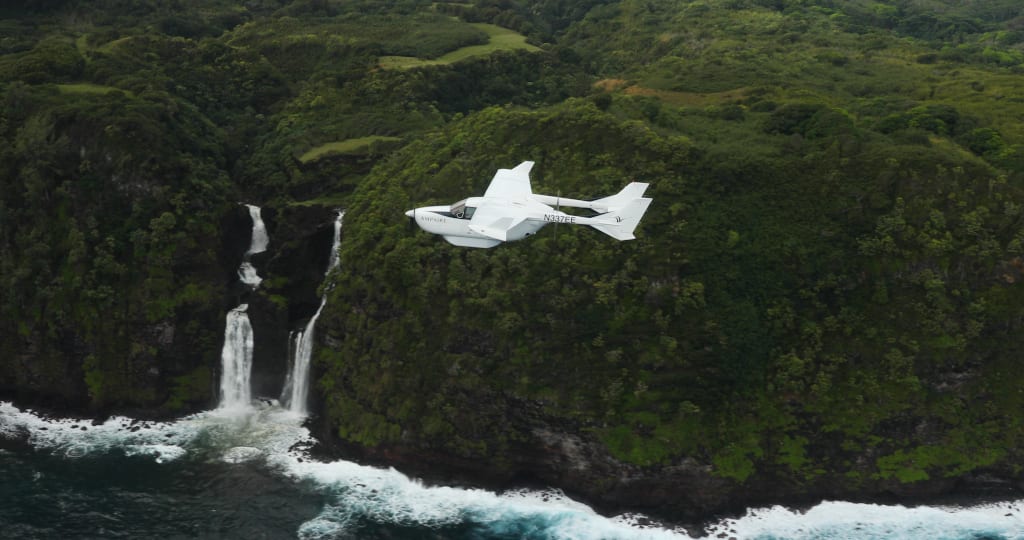 Ampaire is the first to complete a demonstration flight of a hybrid-electric aircraft along an actual airline route. The company flew its Electric EEL aircraft on 22 November on a 20-minute flight from Maui’s Kahului Airport across the island to Hana and back on a single charge.

Ampaire is now flying the route regularly in a one-month demonstration programme with Hawai‘i-based Mokulele Airlines, one of 15 airlines to have signed a Letter of Interest with the company. It is the first use of a hybrid-electric aircraft under the FAA’s Experimental-Market Survey category, allowing Ampaire to fly with their crew and essential personnel for crew training and other exploratory market activity. The flight trials are supported by Elemental Excelerator, a global climate-tech accelerator.

“We’re following the successful path of hybrid-electric automobiles in transforming ground transportation by taking that model to the sky, ” said Ampaire CEO Kevin Noertker. “By upgrading current aircraft with hybrid-electric propulsion we can enter the market quickly and take advantage of existing infrastructure for fixed-wing aviation.”

The trials serve two purposes, according to Noertker: demonstrating electric aviation’s potential to reduce harmful emissions and evaluating the robustness of Ampaire technology. “We can take lessons from this series of flights and apply them to subsequent, larger aircraft designs already in the works.”

The Electric EEL technology demonstrator used in the Mokulele trials is an upgrade of the popular six-seat Cessna 337 twin-engine piston aircraft. The aircraft has a 300-horsepower piston engine in the rear and a 160 kW-capable electric power unit in front, plus a battery pack carried in an under-fuselage aero-optimized shell. Due to the contribution of the electric power unit, fuel consumption and CO2 emissions are reduced by approximately 40-50 percent.

For the flight trials, the only change to ground equipment was the requirement to wire a Mokulele hangar with a 208-volt three-phase outlet. Ampaire has been working with the Hawai‘i Department of Transportation and the Hawaiian Electric Company to explore longer-term infrastructure solutions to support a fleet of hybrid- or fully-electric aircraft.

“The future for regional airlines is electric,” said Stan Little, CEO of Southern Airways which operates one of the largest commuter airlines in the U.S. and owns Mokulele Airlines. “We expect to put hybrid- and all-electric designs into service as soon as possible, and we know other regionals are watching us with great interest.”

“We’re excited to partner with Ampaire to pave a path to electric aviation that unlocks more accessibility to rural and island communities and increases green jobs while invigorating the aviation industry,” says Danielle J. Harris, Director of Mobility Innovation at Elemental Excelerator. “Building a climate-positive aviation industry is about much more than just a plane. It requires rethinking everything from airport infrastructure to pilot behaviour, and that’s what this project is really proving.”

“The market for electric aircraft will expand as airlines perceive that electric aviation is not only environmentally desirable but economically advantageous,” said Noertker. “Electricity cost is an order of magnitude less expensive in comparison to fuel, which is the largest cost item for airlines.”

“Ampaire is focused on the regional market where we can provide viable range for typical routes,” he said. “The average regional airline route in the U.S. is less than 500 miles. Upgrading today’s aircraft for electric power is a relatively low-cost, low-risk path to aircraft certification. Then we expect to move on to increasingly efficient and capable clean-sheet designs.” UBS, the Swiss investment bank, forecasts a $178 billion market for hybrid-electric aircraft.