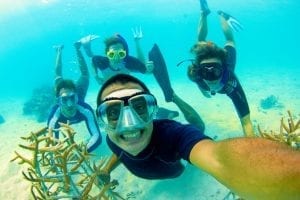 In 2016, the longest global coral bleaching event in history impacted reefs in the crystal clear waters of the Maldives, as a result of the El Niño weather phenomenon. Understanding the monumental role that the reef played, Anantara Maldives Resorts acted quickly by increasing its coral conservation project HARP (Holistic Approach to Reef Protection), which in only one year improved the reefs surrounding each of Anantara’s four resorts in the Indian Ocean.

The five year HARP programme, led by Chief Scientist of the Living Oceans Foundation Dr. Andrew Bruckner, encompasses practical environmental protection and marine education. Additionally, throughout the year, the project is worked on by the on-property dive center teams, Aquafanatics at Dhigu and Elements at Kihavah, sustaining and building on the work done by Dr Bruckner which is inclusive of maintaining, monitoring and growing the coral whilst protecting it at the same time.

The pioneering programme has already succeeded in limiting potential damage to the coral reefs that surround the resorts – ensuring that they continue not only survive, but thrive.

Detailing the work at Anantara Dhigu and its positive impact for both guests and the surrounding environment, Dr Bruckner explains, “Essentially, all of the corals we used were rescued and would otherwise have died. They include juvenile colonies attached to rubble in areas where dredging and sand extraction occurs, as well as broken branches that were detached by snorkellers, divers and strong wave action from larger colonies, and corals that were dying due to coral-eating snails and coral disease. We took small clippings and attached them to ropes suspended in the water column. The nursery creates new habitat that attracts fish, and also maximises survival and growth as the fragments are elevated off the sea floor, preventing burial and consumption by coral predators.

“The work to date has produced a new snorkel trail at Anantara Dhigu and the coral nursery which provides much needed habitat and structure for fish and invertebrates in the area. Within just a few days over a 1,000 fish, comprising 60 species, had moved into the reef. A cleaning station was established at the beginning of the trail, which is now visited daily by a school of batfish, dart fish, unicornfish and other species – and is once again being enjoyed by guests.”

After the programme was in place at Anantara Dhigu, Dr. Bruckner went on to work on the reef that surrounds Anantara Kihavah’s underwater restaurant, SEA, “The project at Kihavah demonstrated that a beautiful thriving coral reef can be created using corals that would otherwise die. All of the corals transported to the underwater restaurant were collected on the reef surrounding the resort, including corals that were broken, fractured and detached from the bottom, piled up in sand channels and at the base of the reef, being buried by sand, under attack by voracious coral-eating snails and affected by coral diseases.

“Many of the colonies were partially dead, but all diseased tissue, predators and algae were first removed from the colonies. Then, small broken branches were attached to ropes suspended in the water. These branches will be grown for about 18 months until they form small “bushes”. The corals will be removed from the rope and used to restore other areas surrounding the restaurant. This will produce a continual nursery and once the grown corals are removed, the ropes will be replaced with new fragments.

“As a result of this work, SEA restaurant guests can once again view a healthy coral reef. Moreover as the restaurant is located at the edge of an underwater cliff, guests can view both the reef marine life and larger pelagic fish, sharks, turtles and other creatures which visit this area in search of food. This is Kihavah’s signature restaurant and is visited by almost all guests, and this critical work promises an unparalleled ocean-viewing culinary experience.”

The next steps of the HARP programme with Anantara involve the continuation of work from the past two years, with the overall vision of restoring the entire habitat. In collaborating with leading experts in their fields for ground-breaking marine biology research, Anantara is pioneering the HARP programme. Currently all project work undertaken in the Maldives by Coral Reef CPR for HARP is funded by the Anantara initiative ‘Dollars For Deeds’, whereby Anantara guests are invited to donate one dollar for each night of their stay, which is then matched dollar for dollar by the hotels.

Dollars for Deeds funds raised in the Maldives are committed over the coming five years to three key focus areas: protection of marine and coastal environments; environmental education; and community welfare.

Future visits from Dr. Andrew Bruckner, and other Coral Reef CPR scientists are set for mid-August 2017 and October. To select your Anantara Dhigu, Anantara Veli, Anantara Kihavah Villas or Naladhu Maldives experience and to help play a part in the protection and regeneration of coral reefs in the Maldives, visit anantara.com or email [email protected]