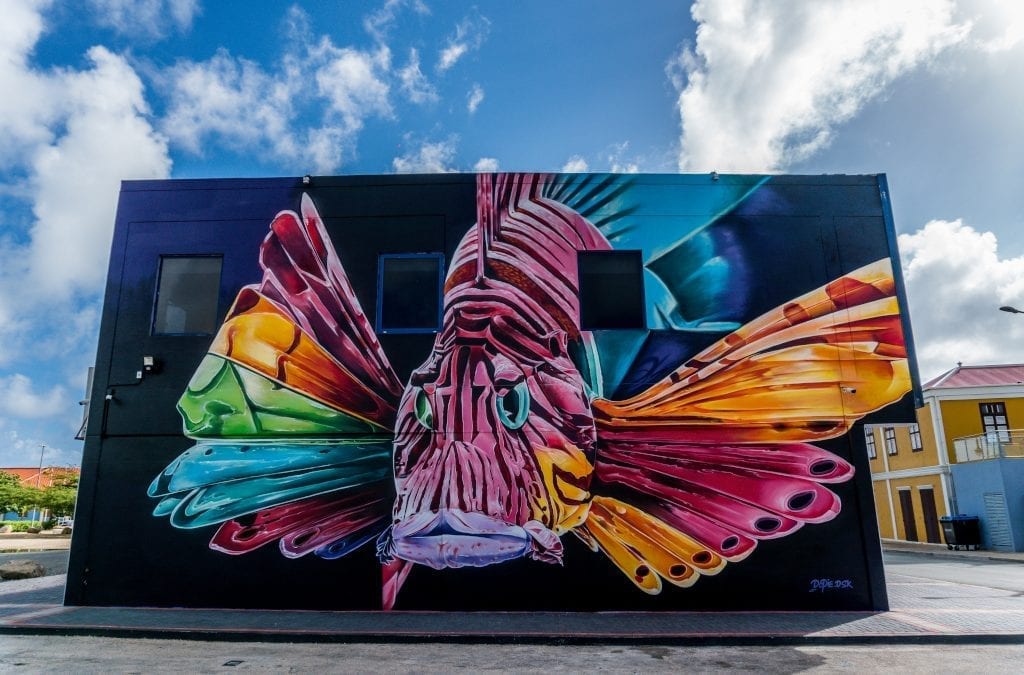 Vibrant colours are an expected ingredient for any Caribbean holiday but Aruba has taken it a stage further and been named street art capital of the island chain.

Its second city of San Nicolas is now a living breathing outdoor art gallery with more than 40 huge murals adorning the exteriors of various buildings.

The influential American magazine Forbes has dubbed the Dutch Caribbean island with the Street Art Capital of the Caribbean accolade and there are now organised tours to enable visitors get the most from this cultural experience.

Artists hailing from Argentina to Amsterdam have come to Aruba to create an outdoor gallery of 44 murals, many of which focus on nature themes.

The tour and murals continue San Nicolas’ renaissance. Once home to an oil refinery, it declined after its closure in 1985, leaving a number of empty buildings.

To discover about the island’s drive to preserve its natural environment, read: Aruba Island Acts to Preserve Endangered Coral Reefs.

Aruban Tito Bolivar travelled to Bogota, Colombia, in 2015 and fell in love with the city’s street art and the way it transformed different neighbourhoods. He pictured adopting a similar strategy back home to breathe new life into San Nicolas’ dilapidated buildings.

But his goal to create an artistic hub in a place known for its beaches was a cultural shift. According to Bolivar, art’s popularity on the island waned in the ’90s. It won a boost when a movement called Korteweg brought together a modest gathering of people to buy arts and crafts in a market setting in 2015. The following year, he formed ArtisA (which stands for Art is Aruba), a group that organises local art projects, including the mural tours and the Aruba Art Fair. The launch of the three-day fair helped revitalise the art scene — it now attracts about 10,000 visitors each year.

When Bolivar began the fair in 2016, he invited 100 Aruban and international artists to town. “During the art fair we always leave murals behind as a present,” he says.

The murals are becoming a must-see attraction in Aruba. Bolivar says that it’s because they come from high-quality artists, they tell a story and they all have the identity of the island.

‘It has revived a forgotten city and now people from all over the world now are visiting San Nicolas,’ he says. ‘San Nicolas is the new place to be now.’

Murals include a rainbow-hued lionfish – frequently seen in Aruba’s waters – and an iguana (also indigenous) in blue and leaning on a window.

Curaçao artist Garrick Marchena uses trompe l’oeil techniques to make his subjects leap from the canvas. One mural shows a green-feathered prikichi, Aruba’s national bird, perched on a branch. Next to it is part of a poem by Aruban nature photographer Damilice Mansur written in a fanciful font: He who plants a tree plants life, plants faith, plants shelter, plants peace, plants hope for future generations.

Aruba Mural Tours (www.arubamuraltours.com) organises daily walking tours of the murals, with informative explanations – the Whole Story Tour is priced at US$20 (approx. £16.50).