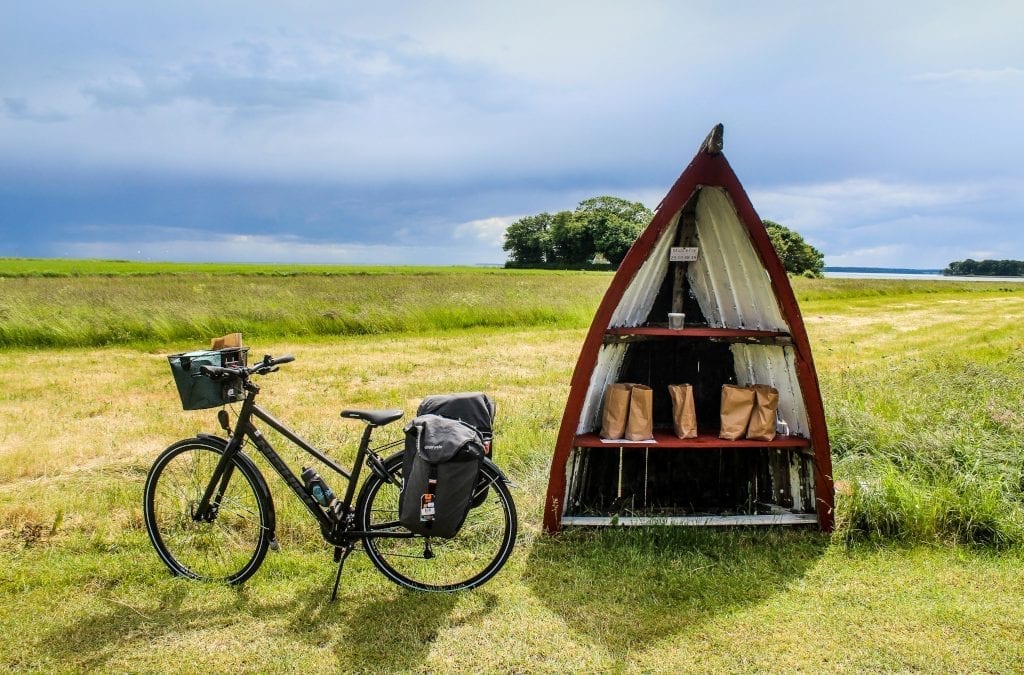 Escape to the Danish countryside and explore the ‘Fjordmino’, a new cycling (or hiking) route. The aim is for the route to officially open next year, and it takes you through the scenic and lesser known region of south east Jutland, an area called Kystlandet – The Coastal Land.

Located an easy 40-minute drive from either Aarhus or Billund airport, Kystlandet comprises the three small towns of Horsens, Odder and Hedensted and their surrounding area.

The new 52km circular hiking or cycling route around the Horsens Fjord goes through forests, fields and villages, as well as along beaches. Circling back to the charming coastal town of Horsens.

For details of the route see here.

The ‘Fjordmino’ also includes a hop across a couple of small islands at the entrance to the Horsens Fjord. The islands Alrø and Hjarnø are served by a small ferry with room for 12 passengers and their bikes.

Other experiences in the area

Back in the town of Horsens a welcome rest can be had at the historic Jørgensens Hotel which has recently reopened in the centre of the town following a major renovation and refurbishment. The former Lichtenberg’s Palace dates back to 1744 and combines the elegance of its 18th century roots with modern styling in the restaurant Eydes and a cozy, subterranean wine bar.

More history can be sought in the town’s famous Prison Museum where tales of its infamous inmates and escapees have been collected or step back to Denmark’s industrial revolution with a visit to Denmark’s Industrial Museum. At Horsens Kunstmuseum (Horsens Museum of Modern Art) explore the impressive collection of modern art and an entire room devoted to Horsens famous son, the artist Michael Kvium. Kvium is best known for his thought-provoking paintings which “mercilessly depict the folly of man and all corners of life”

Discover more of the history of the area at the ‘Uncovered Bridge’. Dating from 1899, and hidden away in a forest near Horsens, the bridge was built as part of the local railway. By 1929 is was covered in sand to form part of a dam and forgotten until it remerged following a major restoration project in 2014.

For panoramic views across the region climb to the peak of the Sugar Loaf (Sukkertoppen). At 108 metres above sea level it is one of Denmark’s highest points with views to match. From there look down on Denmark’s longest river, the Gudenåen, which offers a wealth of exciting activities including canoeing; and see Jutland’s largest lake Mossø, set amongst the thick forests, and the nearby peak of the Himmelbjerget hill.

For a slice of island life venture beyond the ‘Fjordmino’ route to the island of Endelave in the Kattegat sea. Thousands of rabbits outnumber the isand’s human inhabitants and have given rise to the name of the walking route around the island called the ‘Kaninoen’ (Kanin is the Danish word for rabbit), which takes in the island’s most scenic paths along the coastline and through its beautiful landscapes.

Or hire a bike and take the ferry from Hou to the car free island of Tunø. It is easy to get around on two-wheels or by the island’s traxa service, a combined tractor and taxi, that takes guests on scenic tours of the island. Stay the night at the island’s former dairy which is now a small guest house. After a day in the saddle relax on the terrace with a delicious home cooked meal of local produce and take in the panoramic views down to the fine sandy beaches and the water’s edge, merely a few short metres away.

There are currently flights with British Airways from Heathrow to Billund, and with Ryanair from Stansted to Aarhus and Billund and Manchester to Billund. Prices from £19.99 per person one way

Alternatively, there are flights via Copenhagen. SAS operates from Birmingham, Heathrow and Manchester. EasyJet from Bristol, Edinburgh, Gatwick and Manchester; and Norwegian from Edinburgh or from Gatwick to Aalborg and Billund. The drive from Copenhagen to Horsens is approximately 2 hours and 45 minutes.

Relax and Reconnect on the Isle of Wight