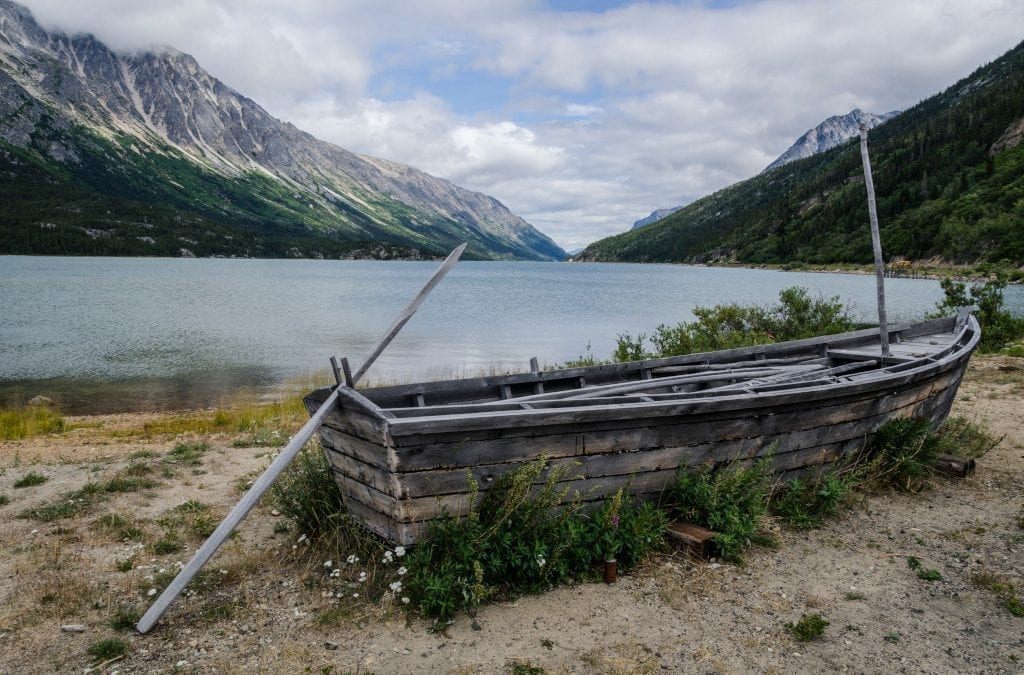 Retrace the extraordinary journey of the Klondike gold seekers on this rugged and beautiful trail from coastal Alaska to the shore of Lake Bennett, Yukon.

When news of a gold strike in the Klondike reached the ears of the world, tens of thousands of hopeful gold seekers arrived in Skagway, Alaska. They soon encountered their first obstacle – the Coast Mountain Range. Following old trails that had been used by First Nations people for centuries, they found a route through the mountains, now known as the Chilkoot Trail.  The prospectors had to haul a mandatory one ton of supplies over the pass, requiring multiple trips on a treacherous mountain trail.

Today, hikers can retrace the rugged and beautiful 33 mile trail from Dyea, near Skagway, to the shore of Lake Bennett. The route is lined with alpine lakes and century-old gold rush artifacts. Co-managed by Parks Canada and the U.S. National Parks Service, the Chilkoot Trail is Canada’s largest National Historic Site. Most people take three to five days to complete the journey.

Alternatively, why not Discover the Wildlife of Yukon? 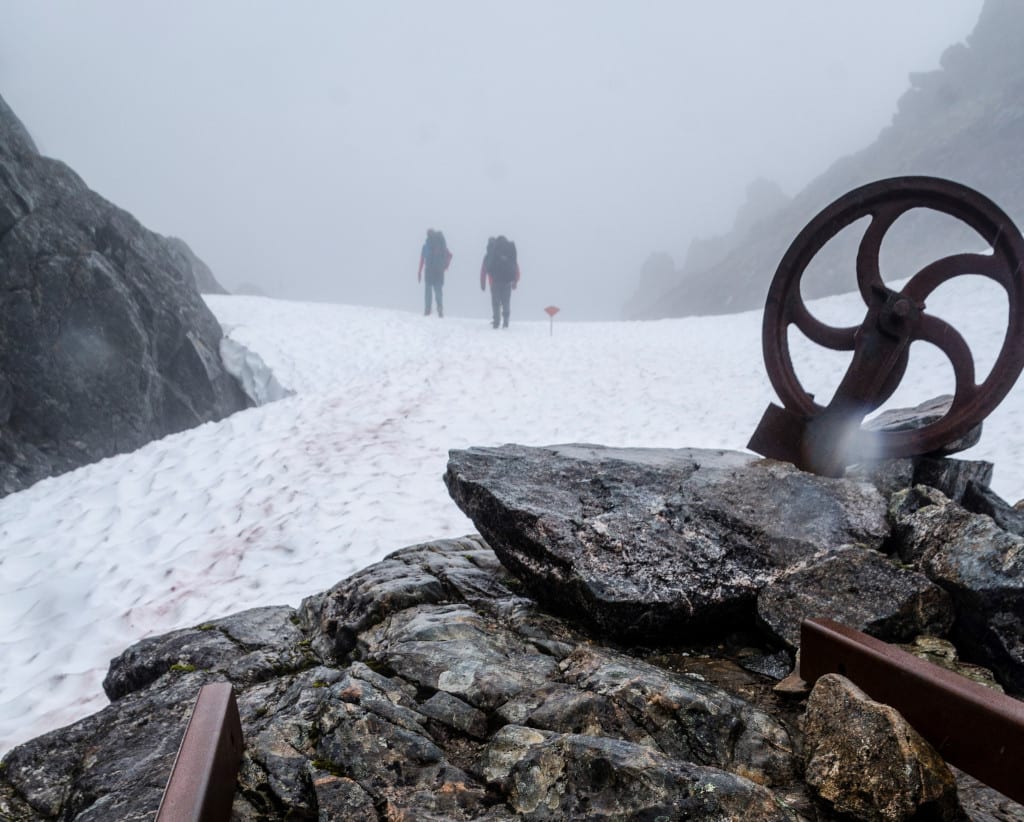 The trail starts at the historic townsite of Dyea, just a short drive (10 miles) from Skagway. Although there isn’t much remaining today, during the gold rush this town had a population of 10,000.

You’ll start your Chilkoot adventure with a reasonably easy hike. The trail follows the Taiya River through the temperate coastal rainforest with minimal elevation gain. After passing by the first campsite on the trail at Finnegan’s Point, continue on to Canyon City where you can explore gold rush remnants including a large boiler. Canyon City sprang to life in 1897 and had a frantic existence until 1898. A tramway system over the Chilkoot was established to help goldseekers get their “ton of goods” over the Pass (for a hefty fee of course). There were also two powerhouses and an array of businesses to cater to the tide of stampeders.

As you leave Canyon City, the trail starts to climb steadily upwards, although elevation gains are modest. You’ll pass through the next campsite, Pleasant Camp and continue on to Sheep Camp. As the last campsite before the infamous Golden Stairs, Sheep Mountain is a popular stop. The US National Park Service has a backcountry ranger station here, and park rangers offer nightly presentations. They’ll provide you with updates on current trail conditions, tips for hiking the trail and history of the area. 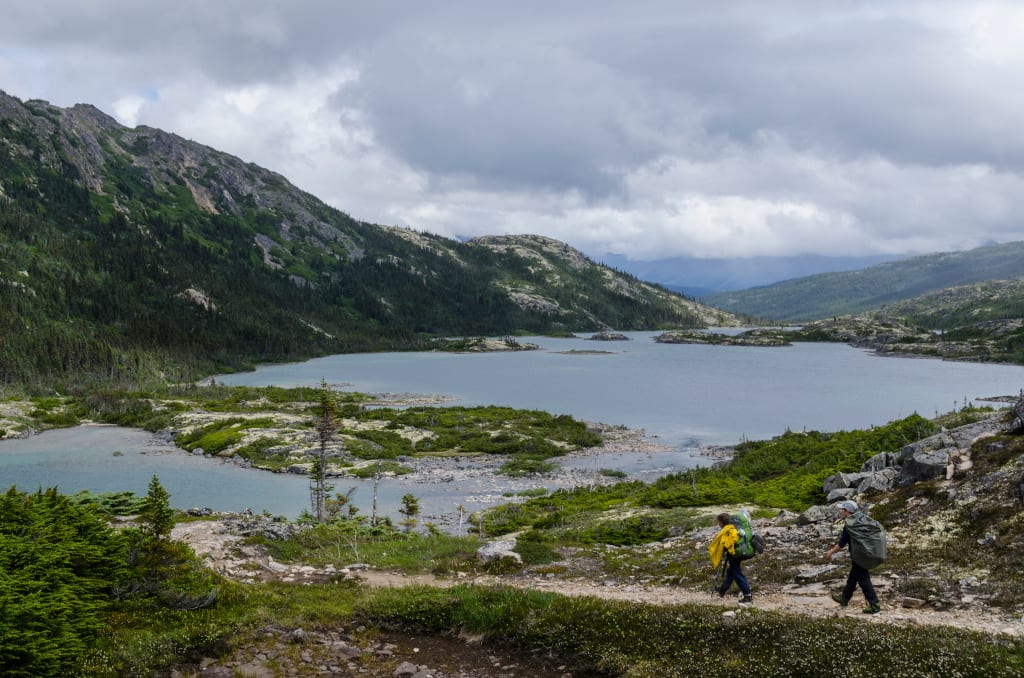 Today is summit day, the most challenging day on the trail. From Sheep Camp, you’ll gradually climb above the tree line and follow a stream up to the Scales. It was here that the stampeders had their supplies weighed before they were permitted to go any further. As the gold rush got underway, Canadian authorities quickly realized that they were going to have a major problem if tens of thousands of people turned up in the wilderness with no supplies. They instituted mandatory supply requirements which were strictly enforced.

In all, approximately one ton of goods (enough for a year) were required. As you explore the assortment of rusted old relics here, be thankful that you don’t have to carry one ton of gear. From here, it’s a steep climb up the Golden Stairs to the Canadian border. At the top you’ll be rewarded with breathtaking views and an epic we-made-it moment! Continue through the gorgeous alpine terrain to Happy Camp.

With the most strenuous part of the trail behind you, it’s on to Bare Loon Lake. This stretch of trail meanders past mountain streams and scenic lakes. After Deep Lake, you’ll leave the alpine and enter the boreal forest as you continue on to Lindeman City. During the gold rush, a huge tent city grew up here as stampeders set up camp on the shores of Lake Lindeman during the winter of 1897-98. After lugging their supplies over the pass they stopped here to wait out the winter and build boats that would carry them down the Yukon River to the Klondike.

Parks Canada has an exhibit here which will give you a sense of what life was like during this extraordinary era in history. After exploring the area, continue on to the scenic campground at Bare Loon Lake for your final night on the trail.

An easy hike this morning takes you through an impressive landscape with phenomenal views to Lake Bennett. At the same time the tent city at Lake Lindeman was forming, another one was springing up at Lake Bennett. This one was the largest in the world with over 20,000 people. Most of them left within two weeks of the ice breaking on the lake in late May, 1898. In the eighteen hours following the breakup alone, more than 7,000 watercrafts of all shapes and sizes left the camp.

The area still shows the effects of all those people a century later. As you wander around the old church, which still stands as a lonely sentinel over the lake, it’s hard to imagine what it must have been like back then. From the historic station, you’ll take the White Pass and Yukon Route railway back to Skagway. The train travels via White Pass giving you a chance to see the other route stampeders used to get to Bennett Lake.