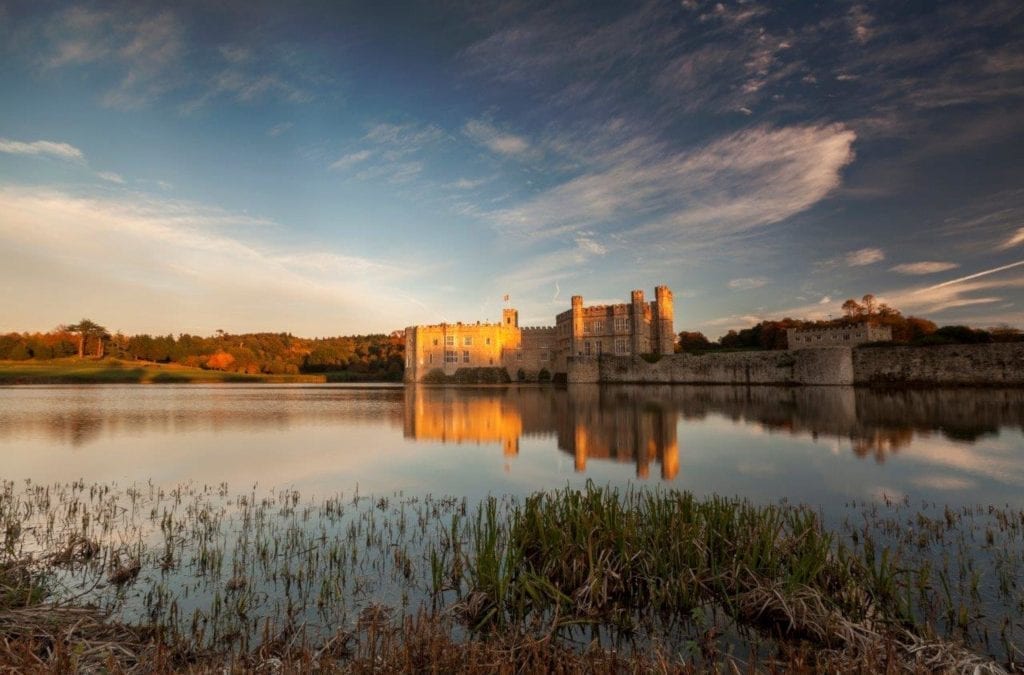 The ancient Leeds Castle in its 500 acres of grounds and gardens, is worth visiting at any time of the year, but most especially in 2019 during its 900th Centenary Celebrations. A series of Leeds Castle events will mark the momentous occasion.

A building was first listed on the site in the Doomsday Book of 1086, although the original stone castle dates back to 1119 by Robert de Crevecoeur. However, little remains of this period, apart from an original window. It was when Queen Eleanor of Castile bought the castle in 1278 that the building went through a series of alterations as it became home to six of the medieval queens of England.

Henry VIIIth turned the medieval fortress into a grand royal palace from 1517-23, suitable for him and his first wife Catherine of Aragon to stay on visits. In 1552, five years after Henry’s death, Leeds Castle was gifted to Anthony St. Leger by Edward VI, and has since been privately owned.

Leeds Castle later on became a Jacobean country house, a Georgian mansion, a 20th century country retreat for the rich and famous, and latterly one of the most visited historic building in Britain. Little of the exterior has changed since 1823

Many celebratory events acknowledge one of the important historical happenings of the UK calendar in 2019.

On 11 and 12 May, classic car enthusiasts will be interested to know that vintage, high performance cars will be displayed around the moat and castle grounds. There will also be a live stunt show in which spectators can vote for their favourite car in nine different categories.

From 25 to 27 May, armoured knights from France and England will compete on combat horses in a Medieval Jousting Tournament. There will also be an archery display, a discovery project on history encampments, and a performance of medieval music.

Athletes should start training for the Leeds Castle Triathlon to be held on 29 and 30 June. There will be a new 900 medal for competitors. Also dates will be announced in June for the official Royal gardens opening and the burial of the time capsule.

The Merchant of Venice will be performed in the open air theatre on the 6 July. A premier of the special anthem written for the 900 celebration entitled A Tribute to Leeds Castle is part of a classical concert on 13 July.

The Carnival of History (see below) will take place on 27 and 28 July.

The open air cinema will show Mama Mia on 2 August and The Greatest Showman” on 3 August, and the open air theatre will host performances of Alice in Wonderland on 23 and 24 August.

The Festival of Flowers will take place on 14 to 19 September, when many different blooms will be displayed within the castle’s grounds.

To finish off the year’s events, Halloween will be marked on 22 to 28 October, with a firework display on 2 and 3 November, and Christmas and the New Year can be celebrated at the castle from November 24 to 1 January.

On 27 and 28 July, the highlight event of the year, the 900 Carnival of History, a colourful enactment of costumed volunteers going through 900 years of the castle’s history, will take place.

The 900 Carnival of History will have input from The Shademakers UK, a leading company across Europe that designs carnival costume. In addition there will be leading professional street arts performers. Shademakers will work with, and be mentors to, students from The University for the Creative Arts in Rochester, Kent and local artists to create the carnival costumes.

Visitors are invited to join the procession as it winds its way around the grounds of the castle finishing in front of this historic edifice.

Stable Courtyard bedrooms are available at the castle where you will have access to the beautiful grounds. Evening meals are served in a converted 1600’s barn with a terrace and castle views. British cuisine is the preferred choice of cuisine. Alternatively if you are looking for accommodation in the area, please try our Hotel Booking Portal.

Admission tickets are available for 12 months from the date of purchase.

Getting to Leeds Castle

Located just outside Maidstone on Kent, Leeds Castle is an hour’s drive from London, just off Junction 8 on the M20. The grounds open at 10 am and the castle at 10.30am.