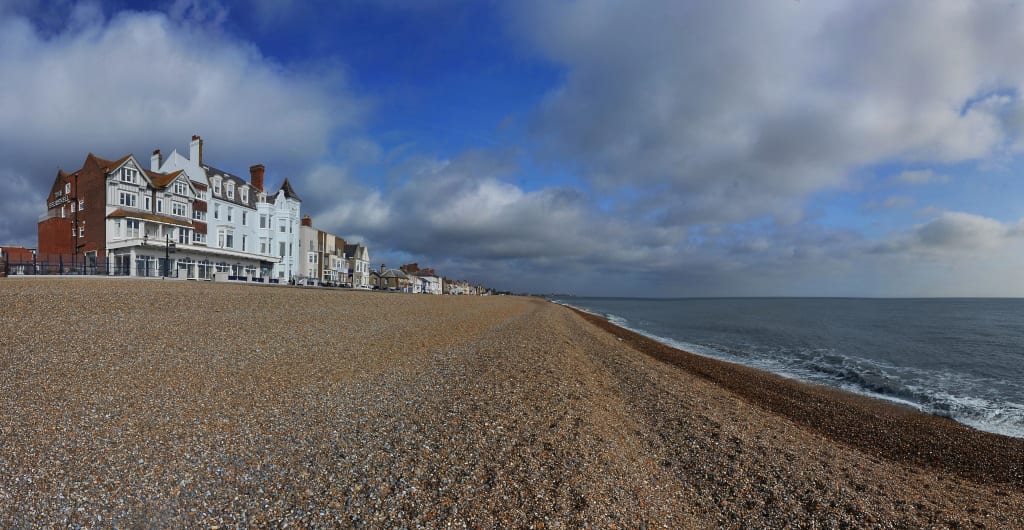 Stay a few steps from the beach at the Brudenell Hotel in Aldeburgh, Suffolk and enjoy lazy mornings watching the sun rise over the sea, dine on the fresh local catch and relax with a cuppa or sundowner on the seafront terrace.

A stroll along the beach towards Thorpeness leads past The Scallop, a tribute to composer Benjamin Britten who lived in Aldeburgh by sculptor Maggi Hambling; discover the town’s history in the timber framed Moot Hall museum and walk the Sailors’ Path six miles inland to Snape Maltings, home to a concert hall as well as artists galleries, studios and workshops.

From £150 B&B per night for two sharing (£75pppn) with the Brudenell’s no deposit flexible offer, which also allows cancellation up to 48 hours before your arrival time. To book call 01728 452071 or visit www.brudenellhotel.co.uk.

A favourite holiday venue with discerning visitors since Victorian times, Aldeburgh’s big skies, wide beaches and charming cottages have also been a magnet for musicians, artists and writers.

In Tudor times it was a bustling port with an important shipbuilding industry; the Golden Hind, the ship in which Sir Francis Drake circumnavigated the globe, was built here in the 16th century.  Dating back to the mid-1500s, Aldeburgh’s timber framed Moot Hall was once in the town centre but it’s now near the sea, which has gradually advanced over the centuries. It was regularly used for public meetings; the town council still meet here and its home to a small museum.

A stroll along the beach towards Thorpeness will lead to the Scallop, a tribute to composer Benjamin Britten who lived in Aldeburgh, by Suffolk sculptor Maggi Hambling. Standing 15ft (4m) facing the sea and the sunrise, the steel sculpture has a quotation from Britten’s opera, Peter Grimes, “I hear those voices that will not be drowned”, pierced on the edge so that it can be read against the sky.

Thorpeness is home to an 18-hole golf course and the picturesque Meare boating lake and its islands. With over 100 boats for hire including rowing boats, kayaks, canoes, punts, dinghies and sailing boats there is a vessel to suit everyone.

Inland the Sailors’ Path leads six miles to Snape Maltings home to a concert hall as well as galleries, studios and workshops for artists and musicians, several eateries, shops, a nature reserve and sculpture park with works by Henry Moore and Barbara Hepworth amongst others. It follows an ancient route used by sailors and smugglers who moored on the river Alde at Snape Maltings to unload goods and, after finding boats stuck at low tide, were forced to walk back home to their cottages in Aldeburgh.

To make a reservation call The Brudenell on 01728 452071; details can also be found on www.brudenellhotel.co.uk.