Mark Bibby Jackson visits the university town of Poznan Poland to discover a place full of vitality where things are not always quite as they seem. 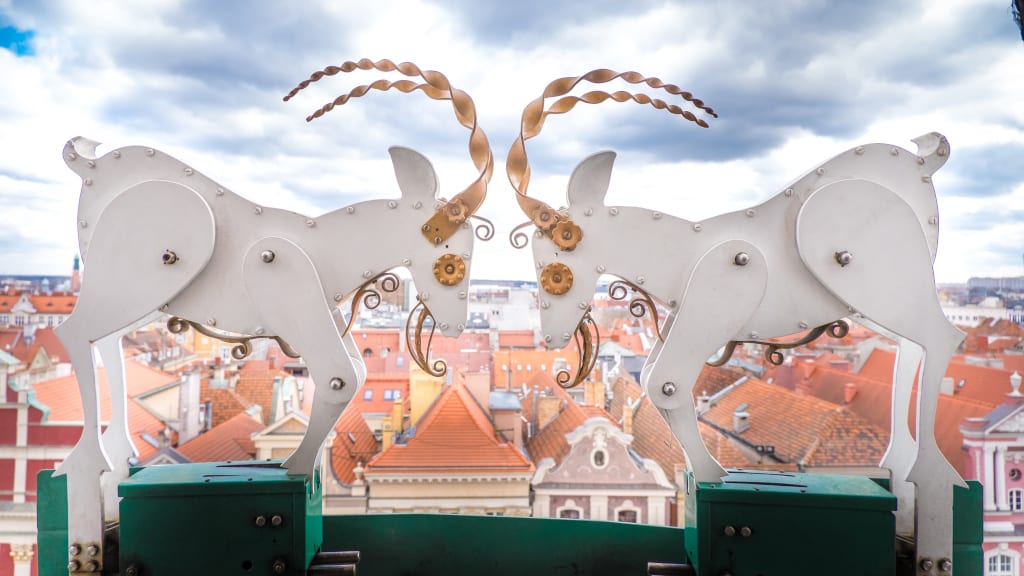 Mark Bibby Jackson visits the university town of Poznan Poland to discover a place full of vitality where things are not always quite as they seem.

“Look up there and tell me what you see,” my guide Andrzej says pointing towards the ceiling inside Poznan’s Jesuit parish church. Earlier we had stopped outside the ornate church, where Andrzej showed me how the church’s frontage did not align with the streetscape, bulging out at the sides as if to make the church appear larger than it was. “It’s stuck on to the building,” he confided.

When the Jesuits built the church in the mid-17th Century, they were short both on cash and land, Andrzej had explained, so they had tried to make the church look bigger than it actually is, and more ornate.

Inside, as I flounder with my pop-up quiz question, Andrzej points to the top of the columns that do not reach the ceiling – they are not load bearing. As if to prove his point, he taps one of the columns, which makes a hollow sound.

“The only solid thing is the floor,” he adds, observing that the gold is only painted and the church’s dome is actually flat. Not that any of this makes it less beautiful.

Our tour had started at the glorious Renaissance former town hall, built in the 16th Century by Italian architect Giovani Baptista Quadro, who settled here, married a local woman, gambled away all his money and died a pauper. Its façade features portraits of some of Poland’s early kings and bishops.

The square, though, is not where the original city and indeed the Christian Polish state was founded in AD 966. This was nearby on what is now called Cathedral Island, and where the current cathedral stands.

The previous day, I had spent the afternoon wandering around both cathedral, although in truth it pales in comparison with the Jesuit Church – smoke and mirrors and all – as well as the adjacent museum, which explains more about the founding of the state. Unfortunately, the original cathedral was destroyed with the current one dating back to shortly after the conclusion World War II.

A Tale of Two Goats

However, it is not the origins of Poland that captures the imagination of most tourists that venture to Poznan, but the tale of two goats.

At midday, a procession is made to the town hall, where trumpets are played and, as the clock tour strikes 12, a couple of mechanical goats appear at the top of the tower bowing to the assembled gathering.

Legend has it, that in the 16th Century a chef grabbed a pair of goats to cook before the king, as he approached the town hall, the animals escaped. In the pandemonium that followed, the goats scrambled their way to the top of the bell tower. The king was so amused by the spectacle – apparently, he was an avid Carry On fan – that he spared the goats lives. Whatever happened to the chef, at least according to Andrjez, nobody knows.

Poznan Through the Ages

Throughout the middle ages, Poznan was a rich city – and remains one still, largely due to its close proximity to Germany’s industrial powerhouse. This made it vulnerable to successive waves of invasions, reflected in its architecture.

A short stroll from the old market square is Freedom (or Liberty) Square. It was here that the people of Poznan rose up against their German rulers to claim independence in 1918-19 and join the rest of Poland.

The architectural style is very different from that around the Old Market Square, which has the feel of a renaissance Italian square. Instead, on one side of Swiety Marcin street the buildings resemble middle Europe in the 19th Century as if you were transported to Vienna, while the other side is dominated by Soviet style architecture from the 1960s, emphasising how short-lived the country’s independence lasted.

Carry on walking along Swiety Marcin and you end up at Kaiser’s Castle, which was built for Kaiser Wilhelm II in 1910 in a Romanesque style. Across the street is the Renaissance-style university and nearby the classical Opera House, all dating back to the same period in what was called the Imperial District. According to Andrjey, the intention was to suggest that the Germans had been here for centuries, throughout different architectural periods. Clearly, they shared something with the Jesuits about appearance and reality.

A statue close to the castle, stands for the Poles who last their lives in a swathe of rebellions against the Soviet state, the first of which was on June 28, 1956, in which some 70 people were killed, and the last saw the start of the Solidarnosc movement.

Being a university town, Poznan’s nightlife has a vibrancy and vitality you do not often find elsewhere. This we had discovered on our first night when swathes of young students walked around the streets celebrating the coming of the weekend. Initially, we thought they might be celebrating the end of their exams, but Andrzej, who himself is studying Law in Poznan, said it was just an ordinary Saturday night. Sometimes, they celebrate a mini-weekend on Wednesdays too.

The population of Poznan is some 500,000, but this is inflated by 130,000 students at the city’s 19 universities. So, if you want a quiet time on your trip to Poznan you had rather time it for the university holiday period when the town becomes considerably quieter.

You shouldn’t let this frenzied activity deter you from coming to Poznan, as there are numerous restaurants around the Old Market Square where you can have an aperitif, dine or simply people watch.

We dined at Bulwar on the main square and enjoyed a wonderful meal that included a goat’s cheese salad and salmon tartar followed by cod loins that would have graced the table of many a square in the great cities of Europe.

Early, I had tried the St Martins croissant, which is stuffed with raisins and hazelnuts, for which the city is famed, as well as a pryz z gziikiem, or boiled potato served with white cheese, which is also special to the city.

All that was left was to return to our apartment and marvel at the vitality of the students, who were once more partying away. How did they find the time or energy to study, I mused, but there again perhaps all that was smoke and mirrors too.

The main festival is the Malta Festival, named after the Lake Malta which is just outside of town, where a Maltese community settled, and the first festival was held. Details can be found here.

If you are looking to book a Poznan hotel or apartment, please use our comparison engine, which scans all the major booking sites so you don’t have to.

Poznan Things to Do

Poznan really is a vibrant city with a rich cultural heritage. To discover more things to do in Poznan, visit the tourist information site, here.

Cover photo by Jakub Pindych. All photos provided by the Poznań Tourism Organisation, or by Mark Bibby Jackson.

4 of the Best Family Friendly Festivals