Mark Bibby Jackson takes the ferry from Ibiza to Formentera to discover an otherworldliness to the small Balearic island on his Formentera Holidays. 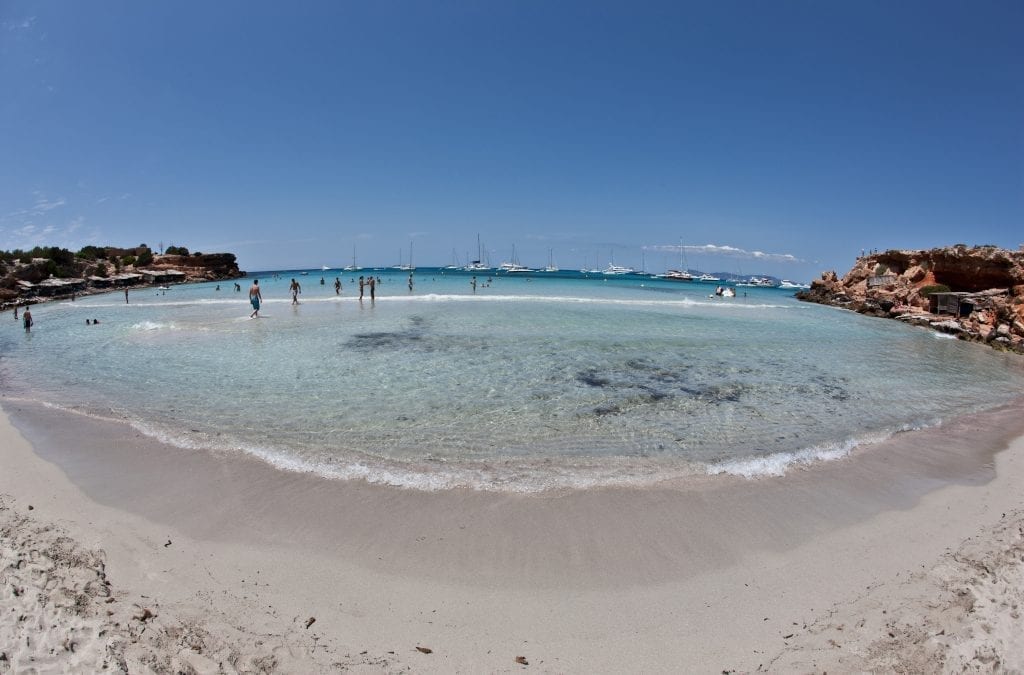 Mark Bibby Jackson takes the ferry from Ibiza to Formentera to discover an otherworldliness to the small Balearic island on his Formentera Holidays.

My trip to Formentera almost became cancelled before I had left London, as Extinction Rebellion (XR) demonstrators threatened to seize control of London City Airport as part of their protests against the aviation industry’s contribution to Climate Change. Fortunately, for me at any rate, I was able to pass through security before the demonstrators disrupted the airport’s normal business.

Only a dozen miles separate the main ports of the Balearic islands of Ibiza and Formentera – the ferry takes 30 minutes – but a world divides them. While the former is known for its heavy partying and mass tourism, especially in the summer peak, its Balearic twin offers plenty of opportunity to eat and recharge your batteries in between partying at Ushuaia.

Formentera was originally ‘discovered’ by hippies in the 60s, and residues of this influence remain with nudism practiced – though thankfully not compulsory – on all the island’s beaches. Originally, the French came here in their droves though their crown was usurped by the Italians after World Cup ‘82, when the victorious Italian team stayed here.

Still now Perrier competes with San Pellegrino on the tables around the island. Formentera holidays are a world away from Torremolinos, and you can quite easily pass a day without hearing an English accent.

Formentera proved equally popular as an escape for musicians. One of the many windmills dotted around the island was featured on the cover for Pink Floyd’s soundtrack album for the 1969 film More.

In recent years the island has become popular with the yachting set, wishing to escape the crowds on other islands – real estate here is amongst the most expensive in Spain. On Formentera island there are no high rise towers, nor major supermarkets and the number of vehicles permitted is restricted during the June to September high season, at other times a more anarchic rule applies, more in keeping with its hippy roots.

The two main towns Sant Francesc and Sant Ferran are barely more than villages, although they pack their fair punch in quality restaurants.

Sadly, the increase in tourism has had an impact on the ecology of the island and in particular its seas and beaches. Dune restoration projects are in evidence with wooden walkways provided to ensure holidaymakers do not stray away from the straight and narrow – although you can always stroll along the beaches themselves.

However, it is in the waters that the most significant conservation project is taking place.

The Es Freus Marine Reserve has some 13,617 marine species, as well as its Posidonia sea meadows. I am here to participate in a workshop arranged by the Save Posidonia Project and to learn more about the activities the organisation carries out throughout the year – perhaps even XR would approve.

The meadows were declared a Unesco World Heritage Site in 1999, though they are still endangered by the number of boats that visit the island each year. The sea grass plays an important role in filtering sediment and preserving the amazingly clear waters that both tourists and locals enjoy.

Measures such as official environmentally-friendly mooring areas and patrol boats to ensure boats are anchored in the correct places have been put in place to protect the vital grasslands. The beautiful Formentera beaches are preserved not just by the walkways but also by clean up campaigns organised across the island.

Both waters and beaches – at least in October – seem pristine. Taking a stroll from my four-star Insotel Formentera Playa hotel along Migjorn Beach, as the sun starts to set is an absolute delight. No debris has been washed up on the shores, and the water is as clear as it is inviting.

Formentera is hardly an island steeped in history, but this is not really why you come here. Measuring only 20 kilometres from east to west and less than two kilometres wide at its narrowest point, this is an island you can easily cover in a day, either by scooter or bicycle.

The island saw mass emigration, especially to the Americas in the 19th century due to a lack of economic opportunities – Ibizans used to call Formentera the island of women, as the men were always away seeking work.

Dating back to 1861, La Mola is the oldest lighthouse on the island, and it has an interesting museum inside, as well as a memorial to the writer Jules Verne, who mentioned it in his book – Hector Servadac: Travels and Adventures through the Solar System. The much more recent Es Cap de Barbaria Lighthouse, opened in 1971 although designed in 1924, is an excellent place to watch the glorious sunset.

Otherwise, the island has a few stone works including a megalithic tomb at Ca na Costa, and a prehistoric site near Cap de Barbaria, but do not expect to encounter another Stonehenge. Perhaps the most interesting feature of the island – Pink Floyd’s windmill not withstanding – are the dry stonewalls that litter the island.

As befits an island, the cuisine of Formentera is largely from the sea. The paella served here is quite fantastic as is the fresh octopus. There is something special about enjoying fresh seafood by the beach at Kiosko El Pirata restaurant on Playa de Illetas, before strolling out into the beautiful turquoise waters. However, for me the best meal was at Dunas Playa in Es Migjorn. The grouper served as a main was quite divine, and went very well with the local wine.

On our last morning we take the boat back to Ibiza. Our ferry is largely deserted and departs at the same time as another one from a rival company making the same short voyage. After all the good talk and positive signs on Formentera this seems a pity.

As we approach Ibiza, the contrast between the islands could not be more pronounced. The shoreline is engulfed in white buildings which would not be permitted in Formentera. Our brief sojourn in paradise over, reality hits us with a bump, which is as startling as the autumnal weather waiting for us back home.

The boat from Ibiza to Formentera costs €48, but if you shop around you can get it for €30-35. The trip takes half an hour. There are flights from London City Airport to Ibiza airport, which is a short drove from Ibiza airport to the port.

We stayed at the excellent four-star Insotel Formentera Playa, Migjorn beach, Formentera. However if you wish to shop around for accommodation on your Formentera holidays please try our hotel booking portal.

For more information on Formentera Holidays

For more information on the Save Posidonia Project

A Day at the Park Hyatt Siem Reap