Eerie, identical wax masks, colossal ostrich plume hats, confetti in churches and orange throwing: the medieval Carnaval de Binche (or Carnival of Binche) is like no other in the world.

In the land of René Magritte, the Carnaval de Binche definitely lives up to Belgium’s long-time love affair with surrealism. In this tiny town in French speaking Wallonia, hundreds of local males – from toddlers to grandfathers – come out at dawn and roam the streets like the undead woken up from a long slumber, all dressed alike in a colourful linen costume stuffed with hay and wearing identical Guy Fawkes-style masks, only more uncanny.

Their costume is that of a Gille, the main ‘anonymous’ character of the Carnival of Binche. It includes a belt with bells called apertintaille, a sheaf of willow twigs to ward off evil, wooden clogs to stamp the soil so it becomes fertile, a basket with oranges to throw at the public, and the disconcerting mask made of wax depicting a fellow wearing round green glasses, sideburns and a Hercule Poirot moustache. Later on in the day the Gilles switch the mask for an outrageous hat with white ostrich plumes towering 1.5 metre high and weighing some 3 kg. The Gilles are exclusively male starting from three years old. All of them stuff their costumes with hay so they have a hunched back and a puffed up front, turning themselves into a much more fancy version of the Michelin man. The female version of a Gille is called a Paysanne with a different blue costume sans hay and mask. The latter occupy key functions in the organisation of the events and accompany the Gilles. Other characters include the Pierrots and Harlequins.

One of the oldest surviving street carnivals on the Old Continent, the roots of the Carnival of Binche go back so far its true origins remain unknown. What is known is that hardly anything about the dress, rituals and customs have changed since the 14th century, prompting UNESCO to list the Carnival of Binche as a Masterpiece of the Oral and Intangible Heritage of Humanity. The fame of this unique carnival has spilled well beyond the small borders of Wallonia, attracting and enchanting throngs of foreign visitors every year. This is probably one of the best ways to experience some authentic Belgian folklore and music while feasting on champagne and oysters (see text below).

Preparations for the festival start many months in advance with the designing and making of lavish costumes and the rehearsal of folk music bands. It’s considered a great honour to be a Gille and the chosen ones spend lots of money on it to take part – the ostrich feathered hat alone costs thousands of Euros. 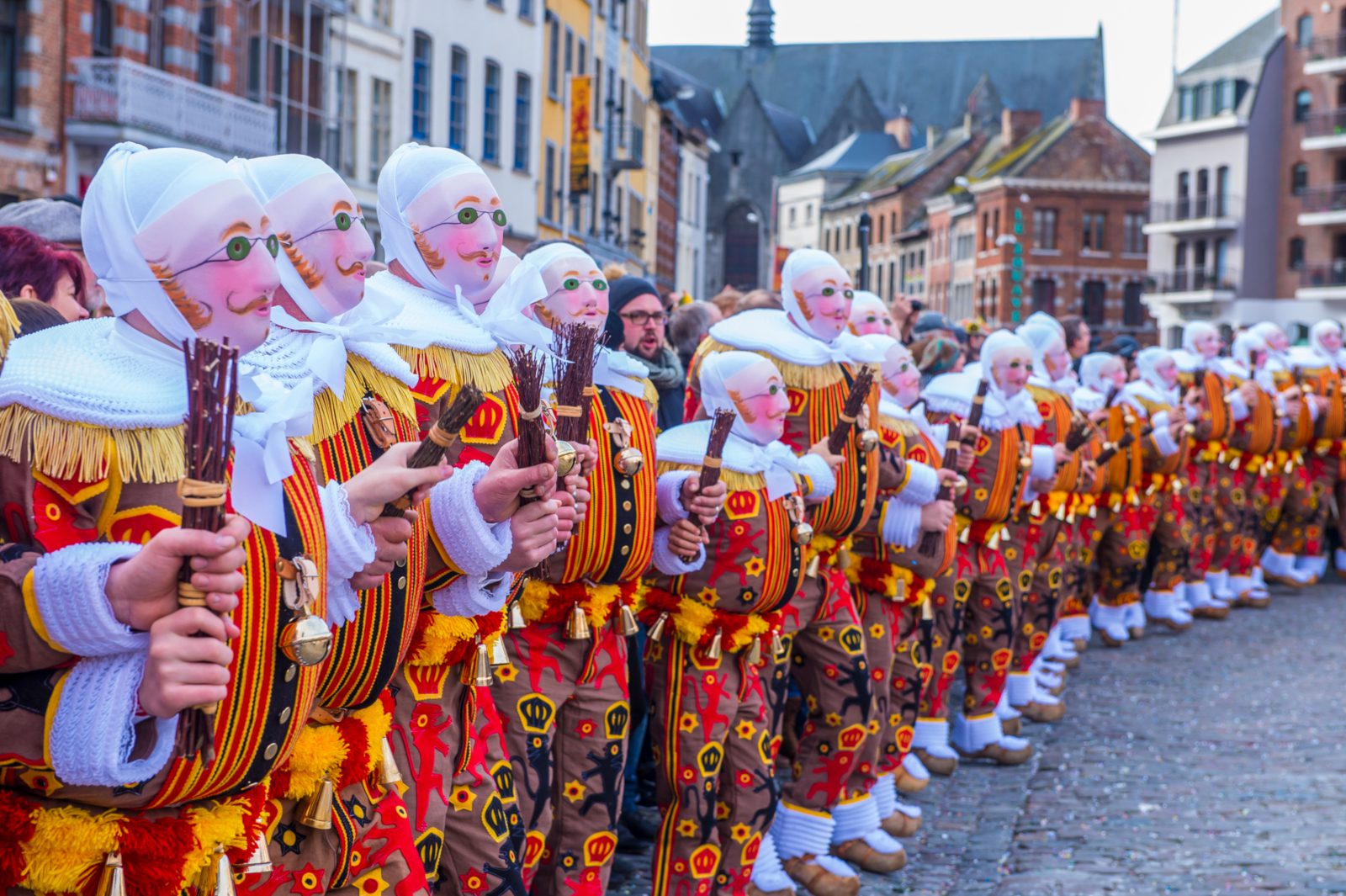 Day One: The Carnival of Binche lasts three days and Shrove Sunday marks the official start. The people who will play a Gille, Paysanne, Pierrot or Harlequin character on the third day – the only day when they appear en masse – now come out in their own original costume that has been prepared in secret. This is probably the most colourful day of the festival with roving hordes donning elaborate outfits inspired by famous characters and current events. They are organised in societies with each society accompanied by the sound of drums and violas and wearing a costume around the same theme.

Day two: The second day, Shrove Monday, is a more intimate day dedicated to the youth and children of Binche. Different costumed youth organisations go around town from café to café dancing and accompanied by the violas. Come late morning huge confetti battles start in the cafés in the city centre, and even in the church on the Place Derbaix which has been transformed into a piano bar for the occasion. Later on there are red Bengal fires on the main square and firework displays.

Day three: The last day, Shrove Tuesday or Mardi Gras, marks the most important and traditional day of the Carnaval de Binche. An elaborate, ceremonial dressing rite starts before dawn within the home of each participating family. While it’s still dark, the first Gille will go out to assemble the other Gilles of his society in his neighbourhood. Traditionally they can’t walk without the sound of a drum so they are accompanied at all times by dedicated drummers turning this into a special nocturnal event. At 7 am they come together to breakfast on champagne and oysters – even the three-year-olds get a glass of champers – after which all societies dance in the streets leading to the main square.

From 8:30 am the Gilles meet up at the Grand Place with the other characters – the Paysans and Paysannes, Harlequins and Pierrots. There they are officially received by the mayor at the city hall where some are given medals. From 3 pm a grand procession starts with over 1,000 Gilles dancing to traditional tunes on the viola and drums. This is also when the magnificent ostrich feathered hats come out.

As the champagne continues to flow, the orange throwing becomes more vigorous when the ripe fruits are thrown at the public instead of to the public. Throwing an orange back to a Gille is considered to be bad form as the fruit is a gift and it’s a sign of good fortune to receive one. The public, therefore, often end up throwing them at one another, sometimes with nearby windows becoming collateral damage.

Back at the main square the Carnaval de Binche culminates with the Gilles dancing in a circle called a rondeau and where a grand firework immerses the Grand Place in colour. Dancing and drinking goes on all night till dawn, marking the end of the Carnival of Binche. 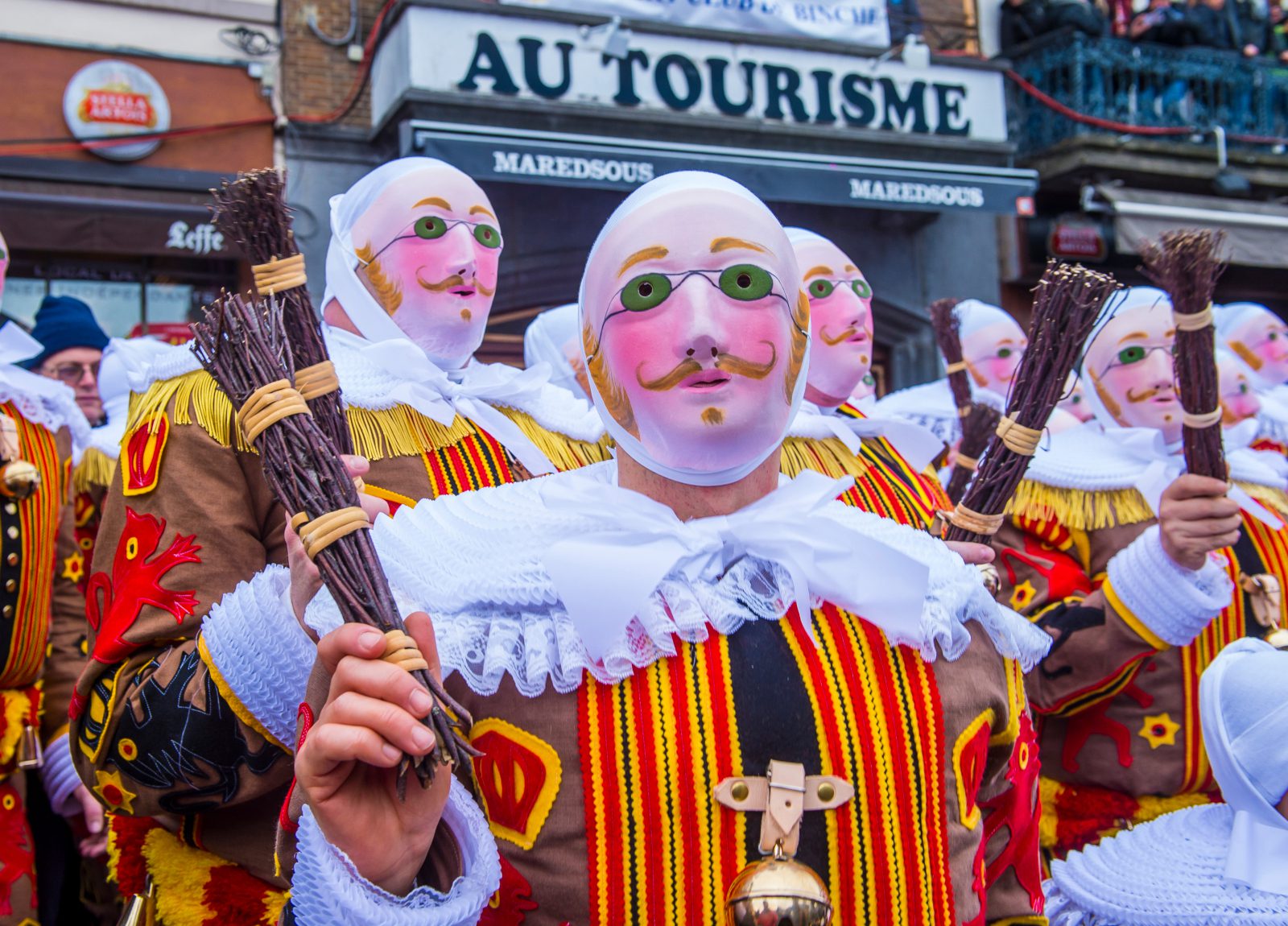 In “Tintin and the Picaros”, one of a series of bandes dessinées or graphic novels starring the famous Belgian reporter, the author Hergé features a carnival troupe dressed and inspired by the Gilles from the Carnival of Binche. In the story, the mask-wearing revellers are part of a plot to overthrow a fictional South American dictator. In real history, when Fidel Castro launched his 1953 offensive marking the beginning of the Cuban Revolution, he also used carnival celebrations to cover the attack.


For up-to-date programme details check out the Carnival of Binche website. If you can’t make it on the days of the carnival but you’re still intrigued, the International Carnival and Mask Museum in Binche not only features the Carnival of Binche itself but also a collection of hundreds of costumes and masks used in rituals and ceremonies from all over the world.