Hawkstone Hall, a magnificent Grade I listed 18th Century mansion, set within 88 acres of beautifully manicured gardens, has been purchased by The Distinctly Hospitable Group, making them the fourth owner in the property’s 550 year history.

A sympathetic refurbishment is being planned to restore the spectacular Georgian property to its former magnificent splendour. The property was originally built as a stately family home, before being in the care of Catholic missionaries until June this year. By summer 2018, following the reinstatement of numerous original features, the 43,400 sq ft building will stand proudly as one of the most opulent hotels and exclusive wedding venues in the UK. 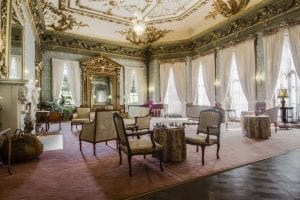 The imposing property and expansive grounds will also offer the ideal backdrop for extravagant corporate events, music festivals, yoga & fitness retreats and memorable celebrations. A vast entertainment space, combined with 88 acres and copious accommodation options, mean the remarkable retreat is set to rival the very best of the UK’s event venues. Regardless of the occasion, guests will be able to enjoy a multitude of communal spaces including an impressive main hall, magical ballroom, refectory and the Gold Room to name a few.

The 18th Century retreat stands handsomely amongst acres of manicured lawns, offering Grade I listed beauty coupled with classic countryside charm. The building’s far-reaching gardens are perfect for exploring Shropshire’s quintessentially British countryside. Within its grounds, the estate boasts a rose garden, croquet lawn, apple orchard, ancient cemetery, forested areas, over half a mile of footpaths and a wonderfully romantic ‘secret garden’. Furthermore, following the discovery of a water supply in the grounds, the original 18th Century lily pond, fishing pond and waterfall will finally be brought back to life allowing the gardens to flourish once more.

Guests will approach the stunning Georgian property via a mile-long gravel driveway. Upon arrival, imposing double doors will open to reveal a magnificent main hall boasting high sculpted ceilings, rich draping and beautiful antique furniture. The building itself is a true masterpiece, featuring a sweeping double staircase, and its own private chapel complete with working bells and an organ. As part of the restoration project, to be overseen by Designer Kay Petrouis, an array of original features will be exposed to visually divulge the rich history of the property; while an English heritage colour palette will be used throughout.

In the main hall, there are a total of 12 suites – including the extravagant Honeymoon Suite – all of which will be named after Jane Austen characters. Adjacent to the main building, a newer wing built in the 1960s will undergo complete renovations to encompass a further 28 bedrooms. In each room, colour tones will mirror that of the main hall featuring soft hues of duck-egg blue and calamine pinks. Opulent furnishings and luxurious, deep mattresses will add a lavish touch to the bedroom interiors.

Hannah Whiting, Group Development Director, says: “Since completing on Hawkstone Hall we are delighted with the progress we have made in restoring one of only two Grade I listed buildings in Shropshire. The gardens have proven to be a major project over the summer and we have thoroughly enjoyed uncovering some of the lost and hidden features, numerous pathways and a secret garden.

Martin Hirst, Venues Director, continued: “We were thrilled when the change of use permission was granted in such a timely manner and we’re currently in the process of working with architects to submit a sympathetic yet innovative proposal for the 1960s wing of the building. We are extremely proud to be playing such a significant part in the history of this magnificent Grade I listed building and we look forward to a very exciting future at Hawkstone Hall.”

The decorated history of the property certainly plays a huge part in its charm. Hawkstone Hall was established by Richard Hill of Hawkstone (1655–1727), also known as ‘The Great Hill’, circa 1707. It became the seat of the Hill family for more than 300 years. Since then, the house itself has been owned by Liberal Politician and Baron, George Whiteley, before the being bought by the Roman Catholic Redemptorist Order.

Overflowing with romance and boasting floor-to-ceiling windows that invite an abundance of natural light into the space, it’s no surprise that the location has been used as a filming location for many period television programmes and films.