Longleat Festival of Light at Christmas

Now firmly established as one of the most-anticipated events of the winter season, Longleat’s Festival of Light will this year take place on selected dates between November 5 and January 3.

The winter spectacular takes the age-old tradition of the Chinese lantern and, as well as completely transforming it for a modern-day audience, also adopts an entirely different theme each year. 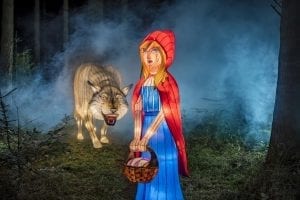 This year, ‘The Magic of Storytelling’ will bring a truly eye-catching collection of installations to the Longleat Estate – transforming it into an enchanted land, “surrounded by wonder, where lions roar, Christmas trees sing, and magical stories come to life”.

Nothing quite like The Festival of Light had ever been seen in the UK before it first appeared at Longleat in 2014 – as hundreds of illuminated designs helped to transform the world-famous Wiltshire estate into a glowing winter wonderland on a spectacular scale.

The Magic of Storytelling theme draws inspiration from classic tales, including Little Red Riding Hood, the Nordic-influenced Little Mermaid, as well as the local legend of Somerset’s ‘Gurt Worm’ dragon.

The inspired narrative of the festival’s 2017 theme will see guests travelling through a mysterious world, peppered with captivating scenes and characters from famous tales, evoking a sense of fantasy and nostalgia amongst all ages.

Each lantern has been conceived by Longleat’s in-house design team.  Dazzling scenes of cherished tales, will include Cinderella’s horse-drawn pumpkin carriage and Snow White’s infamous encounter with the peddler woman; the Sugar Plum Fairy; the dizzying heights of Rapunzel’s’ tower; the Snow Queen, Ugly Duckling, and the charming Frog Prince.

The nation’s first and foremost Festival of Light will once again run alongside Longleat’s traditional Christmas celebrations – Santa’s Train; the Winter drive-through Safari; and plenty of festive fun in the shadow of the luminous Enchanted Christmas Tree Show.

Alongside these experiences, Longleat’s prestigious Elizabethan stately home will be dressed in traditional Edwardian festive décor. This is where guests are invited to become characters in their own story in an historic and eye-opening world of butlers, servants and housekeepers.  Guides throughout the house will interact with guests and each other in traditional costume, breathing an enchanting life into the grand interiors.

An entire day of festive fun at Longleat (including The Festival of Light, Winter Safari Drive-Through, Longleat House, and Enchanted Christmas Tree) start from walk-up day ticket priced at £33.95 (online £30.55) for adults and £25.45 (online £22.90) for children.

Longleat will be open this winter on Sunday November 5, and then Friday to Sunday between November 11 and 26.  It will then open daily from December 1 to January 3 (excluding Christmas Day).

Visitors are being advised that some dates are likely to be sold-out, and that pre-booking is essential.

Full information, ticket prices, and booking details can be found at https://www.longleat.co.uk/festival-of-light.