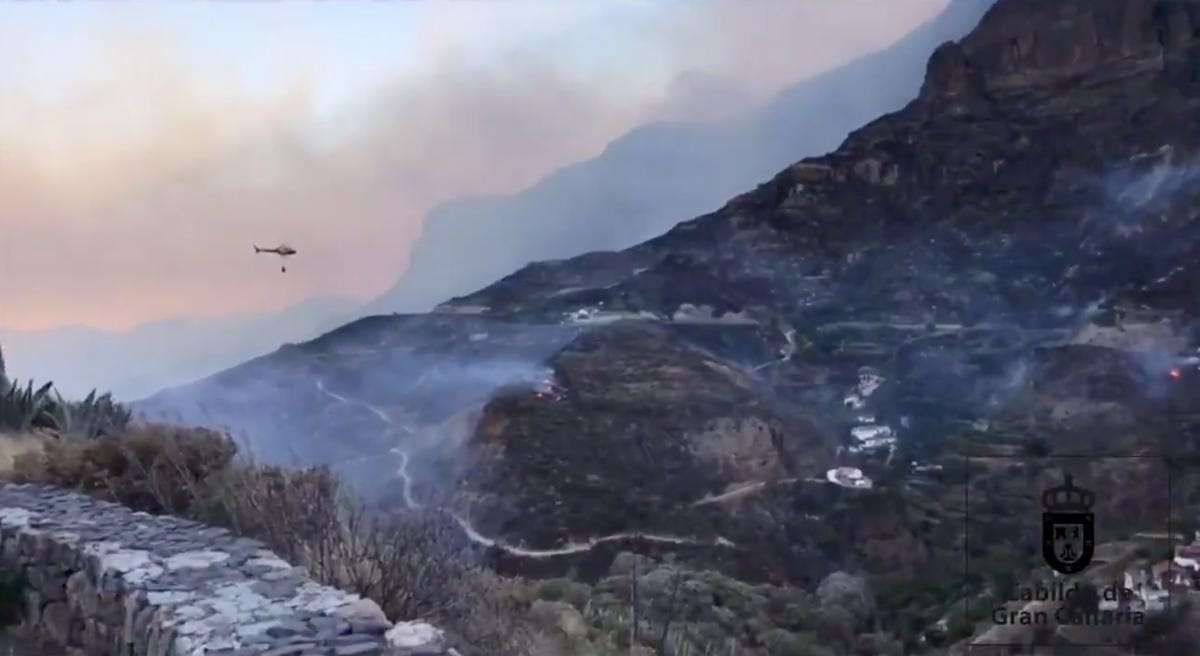 9,000 Evacuated from Fire in Gran Canaria

A forest fire in Gran Canaria has led to mass evacuations on the popular holiday island in the Canary Islands. Some 9,000 people have been moved from their homes on the island due to the fires that started on Saturday, 17 August, near the town of Tejeda.

Authorities say the fires, which are in a mountainous part of the island, represent “an unprecedented environmental tragedy”.

Fire-fighting attempts have been hampered by strong winds, high temperature and low humidity, according to officials.

“The fire is not contained nor stabilised or controlled,” Angel Victor Torres, the regional president of the Canary Islands, said in a press conference on 18 August.

Members of the military have been drafted in to help the 700 firefighters attempting to douse the flames, in addition to planes and helicopters.

Fortunately, the blaze has yet to spread to any tourist centres or residential areas, but it has reached Tamadaba natural park, which has some of the oldest pine forests on the island.

Flames have been reported at reaching 50 metres in height, hindering the efforts of planes to drop water on them.

Torres confirmed he has sought assistance from Spain’s central government to help fight the fire.

Only last week hundreds of people were evacuated due to a separate series of fires in Gran Canaria.

Although the Mirror newspaper reported that the fire was started by a 55-year-old Spanish man who has been arrested on suspicion of reckless behaviour for using a soldering iron on open land close to his house, we understand this related to a previous fire. The Guardian refers to a statement by the head of Gran Canaria’s authorities, Antonio Morales, that the fires were believed to have been started intentionally, but that the cause of the fire had not yet been ascertained.

Reuters reports eyewitness Carla Rodriguez, who was travelling to a local festival in Juncalillo, as describing the scene as “one of the most painful images I’ve seen in my life”.

By 20 August the fires were believed to be under control due to a lessening of the winds, according to Associated Press. Torres reported that 16 planes had taken off to fight the fire under far better conditions. Margarita Robles, the defence minister in Spain’s caretaker government, is reported as having said that the blaze could be contained within the next 48 hours, raising hopes that the evacuees will soon be able to return to their homes.

Fortunately, no injuries have been reported.

If you are planning to travel to Gran Canaria, we suggest you contact either your travel operator or government prior to departure.