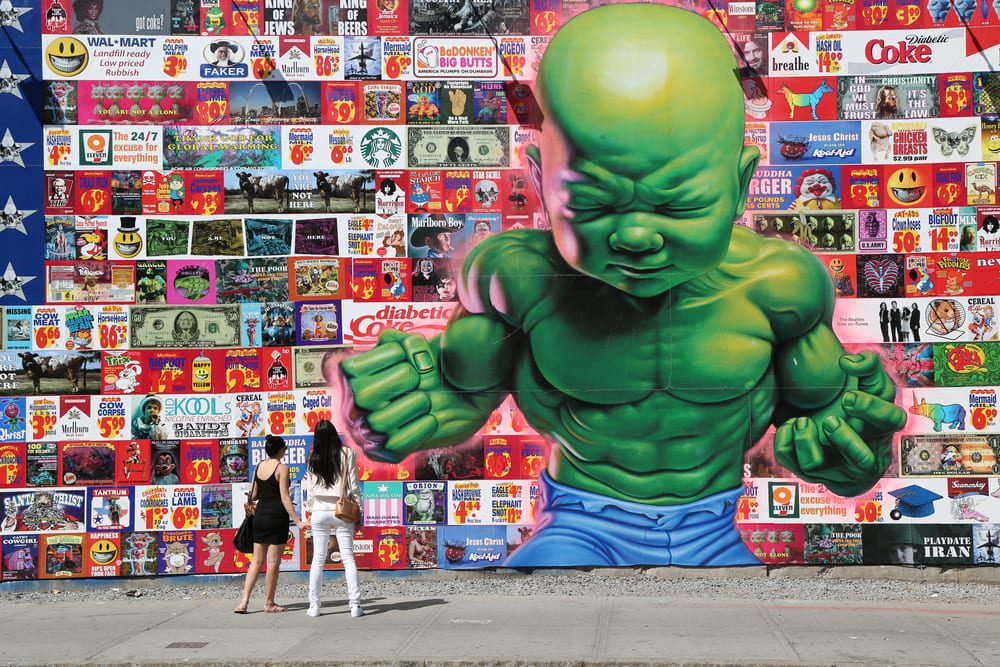 Graffiti as an emerging mainstream art form is helping to improve or revitalization depressed areas of cities that otherwise were considered dead zones, and people are now traveling to cities they may not have considered traveling to in order to check out art destinations. Artists are finding new venues and outlets to express themselves and earn a living from their work.

This type of placemaking is having an impact across the United States and Canada. The National Endowment for the Arts has tracked some of the results through their “Exploring Our Town” program. What emerges out of their research is that it’s not just the big cities that are turning a corner on their use of public space.

Several of those projects that had a street art/graffiti element were in small and mid-size cities including projects such as Downtown Pathways in El Paso, Texas; Grant Street Global Voice in Buffalo; Revitalizating Station North in Baltimore; and The Whittier Neighbourhood Mural Project in Sioux Falls, South Dakota. Each one of these projects had a set of anticipated impacts and each reported positive unexpected impacts. Notably these projects brought communities together, increased foot traffic and investments ranging from new restaurants, new retail, and new infrastructure spending.

In Canada, there are examples of partnerships that are forming around grafitti art including Toronto’s Graffiti Alley. It has support across non-profits including the laneways project, the city of Toronto’s Heritage Department, and most recently was a featured project in the creation of the world’s longest instagram photo created by Toronto photographer Justin Poulsen in collaboration with Havas Worldwide Canada. Tunnel du Rouen is a one of the largest legal walls in Montreal. It’s a dynamic entry to the list in that the artists continually evolve the work that is done both on the wall of the tunnel and nearby.

In Vancouver, a by-product of their mural festival, there are ongoing activities and walking tours put on in collaboration with the Mount Pleasant Business Improvement Area with support from local city councillors. Some other cities are starting to recreate and bring back a graffiti culture that had existed in the mid-2000s such as what happened in London, Ontario. This summer, over 20 local graffiti artists participated in a “graffiti wall jam” put on by Mitch Taylor, the owner of Leisure Surf and Social Club store. All of these efforts contribute to more people being involved in their communities and spending more money in their own cities to support local economies.

Many European cities are taking the lead, among them is Lisbon that has an official office for managing street art that has led to the promotion of eco-tourism and walking tours. In Lisbon, the Bairro Alto area is one of the more popular places and highlighted by Bohemian Trails, plus in an article by Steven P. Harrington and Jaime Rojo aka BrooklynStreet.com. There are the free walls in the Poblenou neighborhood in Barcelona. This is an area that was once really industrial and now and has now become revitalized and is a thriving go-to destination point in any visit to the city. Another great example is the European Cultural Capital city of Aarhus with a graffiti Facebook group of over 15,000. Others include Pigneto (Rome) and Berlin which will see the opening of the The Urban Nation Museum For Urban Contemporary Art.

There are even graffiti hotels, including “The Walled Off Hotel” created by Banksy in the Palestinian West Bank city of Bethlehem, and there are graffiti installations at Art Basel Miami and festivals popping up in countries that haven’t been seen before such as in India. The area in Mumbai known as the Lodhi Colony was turned into India’s first public art district. The 2nd edition of St+art India will be happening between October to December 2017.

All of these efforts are contributing to the rise in the percentage of art in public spaces. Adding to this is a new book on street art by Ed Bartlett and published in spring 2017 by Lonely Planet. It’s no surprise that some of the top livable countries in 2017 are thriving with graffiti communities including Germany, the Netherlands, Iceland, the United States, Canada, and the United Kingdom.

To see the full list and read more about the subject, visit Bombing Science.