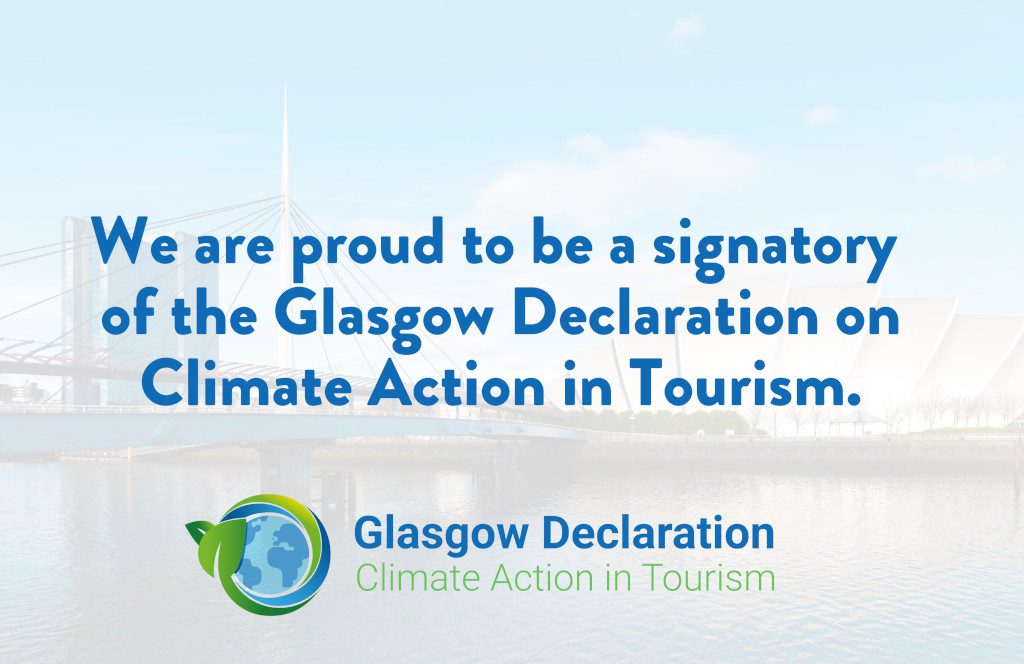 Travel Begins at 40 has become a signatory of the Glasgow Declaration on Climate Action in Tourism, today, 4 November.

The Glasgow Declaration encourages the acceleration of climate action in tourism by securing commitments to reduce emissions in tourism by at least 50% over the next decade and achieve Net Zero as soon as possible before 2050.

The Declaration was officially launched at the UN Climate Change Conference (COP26) on 4 November 2021.

As a signatory of the Glasgow Declaration on Climate Action in Tourism, Travel Begins at 40 has committed to aligning itself with the latest scientific recommendations, so as to ensure its approach remains consistent with a rise of no more than 1.5°C above pre-industrial levels by 2100.

Travel Begins at 40 Founder Mark Bibby Jackson says, “We are proud to be a signatory of the Glasgow Declaration on Climate Action in Tourism.

“As the declaration states, a just transition to Net Zero before 2050 will only be possible if tourism’s recovery accelerates the adoption of sustainable consumption and production, and redefines our future success to consider not only economic value but rather the regeneration of ecosystems, biodiversity and communities.”

Travel Begins at 40 has already pledged itself to become climate neutral by signing up to be a Climeworks pioneer, by which it will have an amount of its CO2 emissions captured from the atmosphere every month to ensure the website is climate neutral.

“Doing as much as we can to reduce our emissions while travelling, and then using technology like Climeworks’ direct air capture, to help suck up the unavoidable emissions is something we all need to consider. Which is why we want to inspire our readers and all travel fans to do what they can to reduce their carbon footprint,” said Bibby Jackson.

Bibby Jackson has also committed his flights are fully offset via Trees4Travel.

Last month, Travel Begins at 40 also signed the SUNx Malta Climate Friendly Registry, a move that commits itself to record maximum emissions ambitions for 2030, 2040 and 2050

By signing the Glasgow Declaration, Travel Begins at 40 has agreed to deliver or update climate action plans within 12 months, and work in a collaborative spirit, sharing good practices and solutions, and disseminating information.

Bibby Jackson believes that while Travel Begins at 40’s actual emissions are relatively small, it has a large part in conveying the message that climate-friendly travel is vital for the future of the planet.

Research into CO2 emissions carried out by UNWTO/ITF and released at the UNFCCC COP25 in December 2019, showed that transport-related emissions from tourism were forecast to increase by 25% by 2030 from 2016 levels, against the current ambition scenario.

“We need to change the narrative,” says Bibby Jackson. “Travelling helps us relax, meet different people, learn about cultures unlike our own, try new experiences and foods, and it makes a huge contribution to the economy of many, many countries. So, on the one hand, it’s important we continue to travel, but on the other, travelling does pump a large amount of carbon dioxide into the atmosphere – and we need to reduce this dramatically if we are to have any chance of slowing climate change.”

“It’s not a simple binary choice of either – or,” he says. “We need to travel and we need to stop climate change. The most important thing is for is to work together as a sector to tackle the flying elephant in the room, and to make flights more climate friendly – whether this is through sustainable fuels or new technology.”