For a secluded getaway on a tropical island, forget Thailand’s well-trodden shores because the Cambodian coastline is emerging as a hideaway destination. Words by Marissa Carruthers. 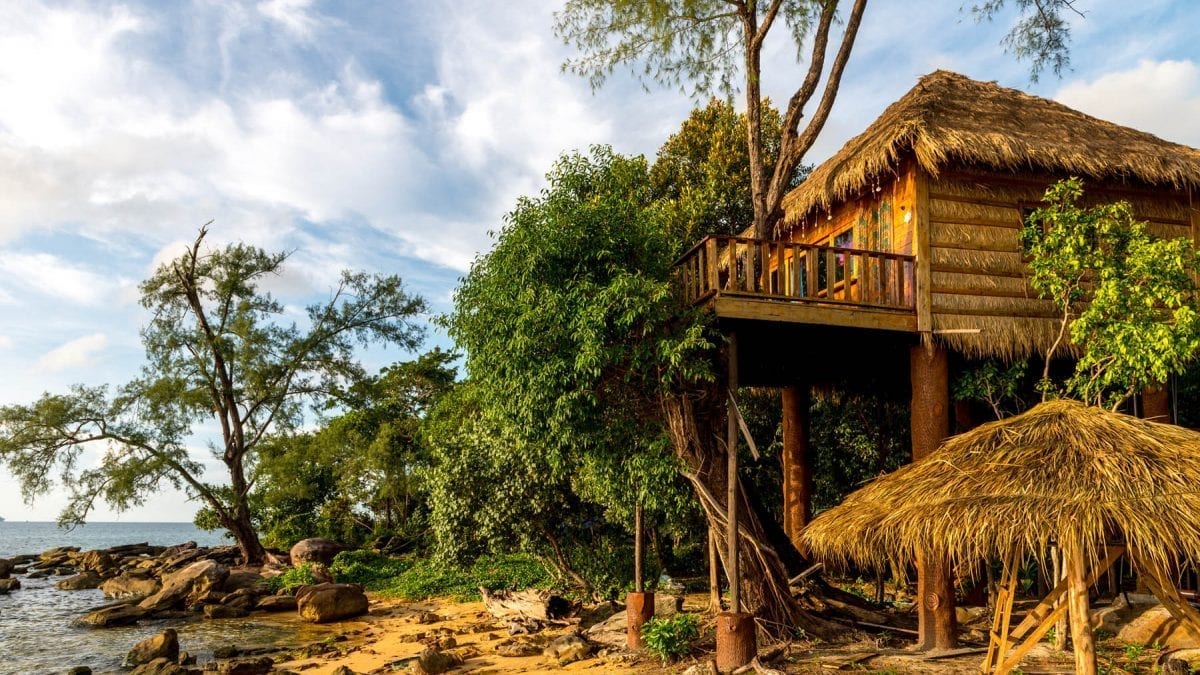 There’s a loud splash as I jump from the side of our slender wooden fishing boat into the crystal clear turquoise waters. My feet sink into the soft sand that covers the island of Koh Ta Kiev, and as I wade towards shore, the blinding white of the beach is interrupted only by tufty palm trees stretching towards the clear blue sky. It’s a postcard-perfect setting unfolding right before my eyes.

We’ve just spent a little more than 30 minutes sailing calm seas from Ream National Park – another secluded spot about 20km away from Sihanoukville town centre – on the mainland. Here, despite being a stone’s throw from the rowdy coastal town, the two locations are worlds apart. Offering the delights of the tranquil paradise that remains on some of Cambodia’s islands, here stumbling across other foreigners is about as likely as coming face-to-face with a tarantula in the park’s sprawling jungle – fortunately slight.

Accessing the park’s full potential is now a whole lot easier with the opening of Monkey Maya, which overlooks Ream Beach. The sensitively-built, wooden lodge featuring a 16-bed dorm, five wooden huts and a cliff top bar and restaurant area, makes the perfect base to explore the surrounding forest or take a stroll along the isolated stretch of sand, collect some shells and dive into the warm waters.

If it’s the typical tropical island life that appeals, Koh Rong, which kicked off the country’s island hopping trend, could be the place for you. As Cambodia’s second largest island, Koh Rong is undoubtedly the most developed. However, it hasn’t always been that way. A few years ago, the beach area of Koh Touch was clear of the seemingly endless stretch of guesthouses, bars blaring music until early morning, beach shacks and a few marts serving convenient snacks.

For more ideas about travel to Cambodia, read Things to Do in Siem Reap Avoiding Angkor.

Instead, it boasted barely touched sands akin to that found on Koh Ta Kiev, almost desolate shores, and a couple of guesthouses hidden among the forest that flanks the sand. It was a very different picture when Paddy Robinson opened Money Island bungalows in 2010. “There was one guesthouse at the top of the beach and a couple more the other end. That was it,” he says. “It’s incredible how quickly it has developed.”

Nearby Koh Touch is the perfect place for party people, and still boasts bright white beaches, crystal clear waters and dense tropical jungles. Proof that it has managed to retain its deserted paradise feel lies in the fact that smash-hit American reality TV show, Survivor, recently used it as the location for its latest series. And peace and quiet can be found on many of the other beaches that skirt the island and attract a tamer crowd.

Sitting just a 30-minute fishing boat ride away is the quieter island of Koh Rong Samloem. While it remains a hot destination for day-trippers from Koh Rong, those choosing to stay overnight on the island are far fewer than its noisy neighbour. This means that, for now, the island is home to an abundance of paradise spots where you can seek refuge.

M’Pay Bei, a traditional fishing village that hides among the palm trees and tropical forest that cover the island’s northern tip, boasts a handful of simple shacks and guesthouses, faded green fishing boats bobbing on inviting waters, and almost desolate shores, save for a few locals and travellers. The island is known for its diving and several centres are based in the village, offering packages for those wanting to explore what lies beneath. M’Pai Bei is also the base of Marine Conservation Cambodia, a volunteer-funded ecotourism project that gives visitors the chance to take part in initiatives such as marine conservation.

To the east is the more exclusive Saracen Bay. Significantly more developed than M’Pay Bei, a cluster of eco-tents and boutique bungalows are nestled on the edge of the beach. Despite being another popular stop-off point with day-trippers, isolation can still be found, and relaxing on the beach or snorkelling in the sea are perfect ways to laze away the day.

The western side is an hour’s trek through the thick forest via jungle paths from the east, or can be accessed via boat. The rolling hills on the way make the perfect spot to watch the stunning sunsets that paint the sky. Three desolate yellow beaches await, with Sunset and Lazy beach both boasting accommodation.

Back at Koh Ta Kiev, you can truly find all of the ingredients for the idyllic tropical island life. Our drop off point on the west of the island boasts a rickety wooden jetty jutting out into the turquoise waters, powder-soft sand stretching for as far as the eye can see. Often on the agenda of boat trips, due to its proximity to the coast, the island is surrounded by beaches and is home to a smattering of guesthouses.
With three accessible beaches, the secluded, western side of Koh Ta Kiev has several guesthouses and even has its own absinthe distillery for those who dare. Long Beach and Coral Beach are also prime solitary beach locations.

As Koh Rong becomes increasingly over-run with tourists, this spot is becoming the new escape, and has stolen the title of perfect island getaway. It is now becoming more popular with travellers wanting to get off the beaten track so, undoubtedly, it will not be long before its shores become well-trampled. My advice – get there soon, before it becomes a paradise lost.