With environmental concerns inspiring more train travel, Joe and Amber take the Bangkok to Kanchanaburi train for a weekend break. 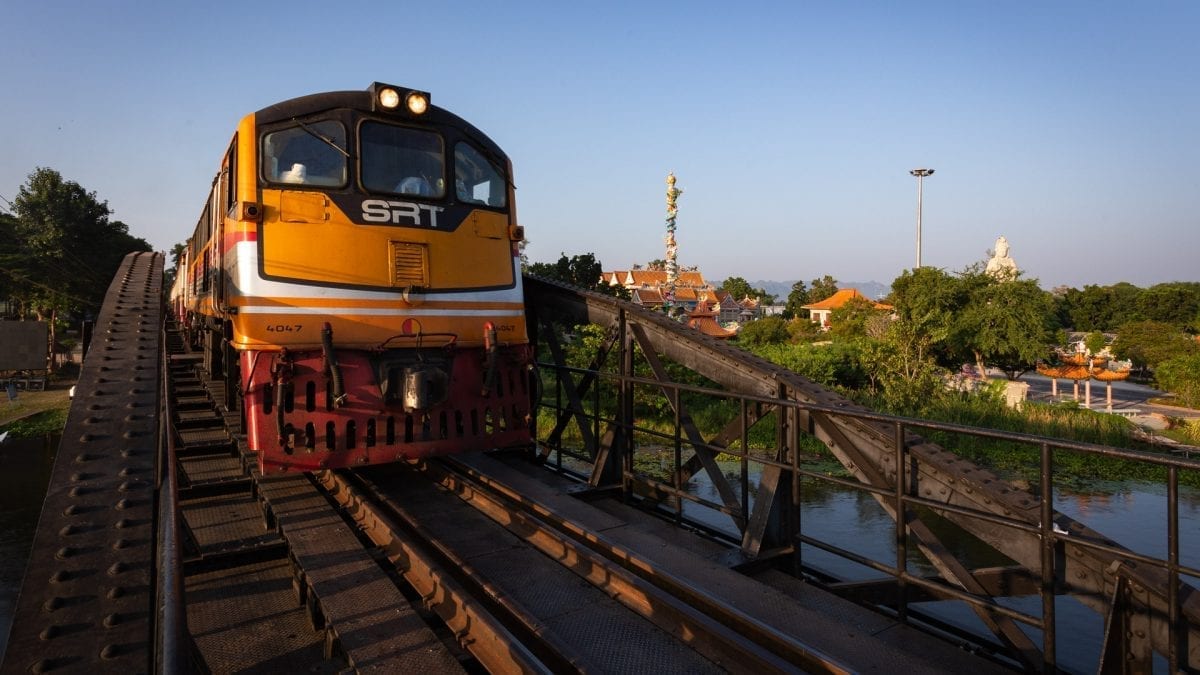 With a bag of fresh fruit from the nearby market in hand, we boarded the train for the 7:50am departure at Bangkok’s Thonburi railway station. The Bangkok to Kanchanaburi train has standard third class carriages and open windows, with cushioned seats which were more than adequate to start. We claimed a seat on the left-hand side – this was an important detail for later. 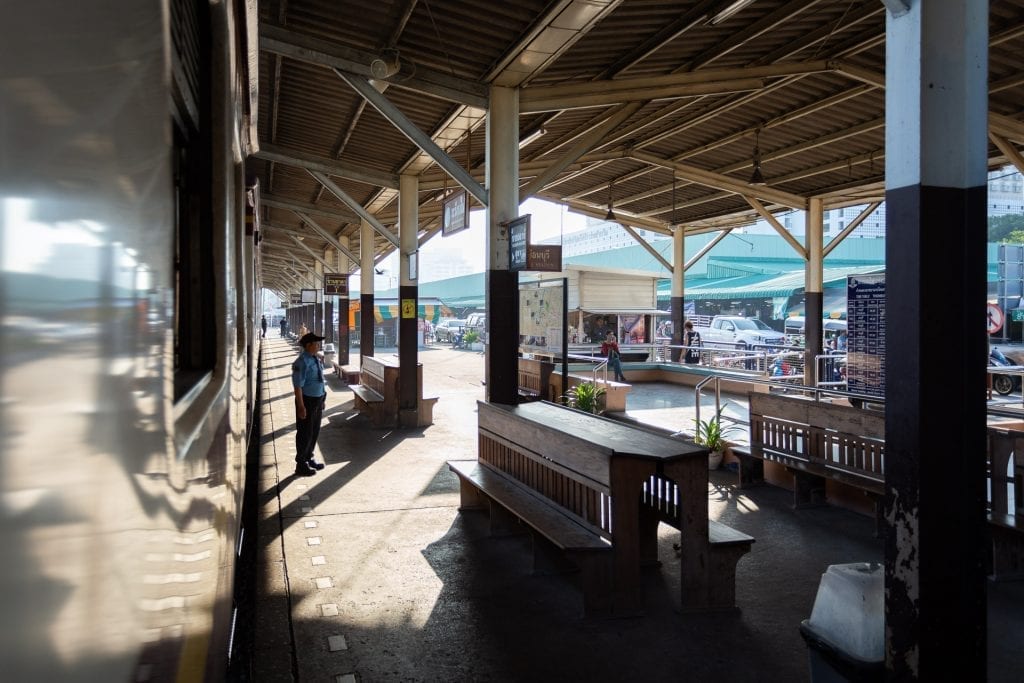 The Bangkok to Kanchanaburi train runs twice daily from the tiny Thonburi station. We opted for this option rather than the “tourist excursion train” which is an alternative option that runs at weekends from the main Hua Lamphong station. 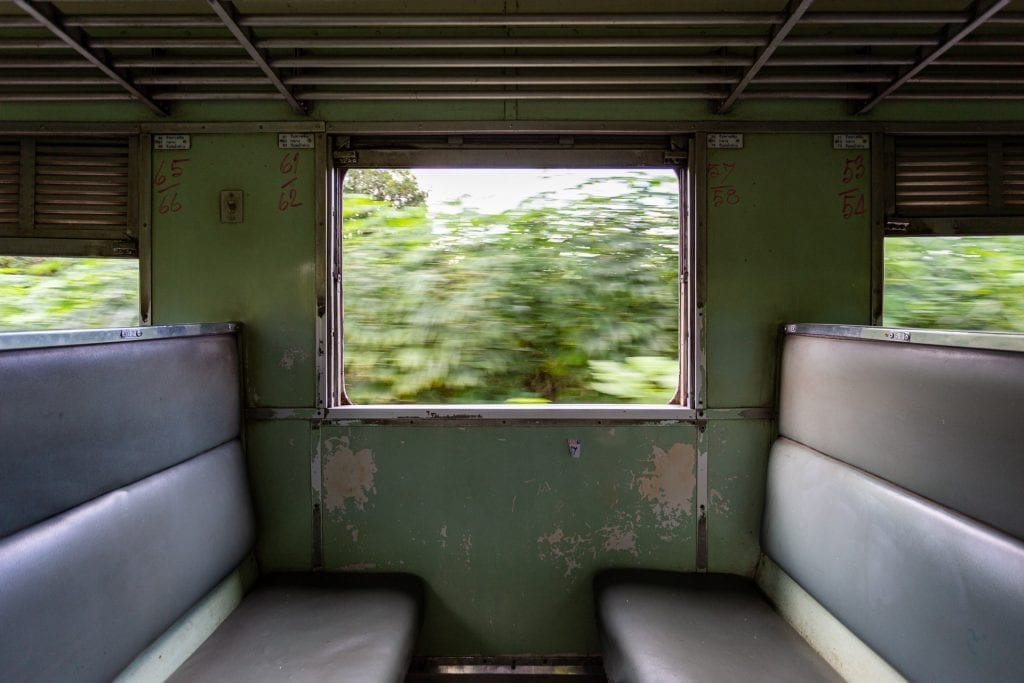 A ticket for foreigners costs just 100 baht to ride to the end of the line at Nam Tok. Our plan was to ride the train for the next five hours all the way to the end, then 2.5 hours back again to alight in Kanchanaburi where we had booked a hotel next to the Bridge over the River Kwai. There was only one reason to spend the extra time going to the end of the line – to pass over the Wampo Viaduct, a wooden viaduct built by the POWs in the 1940s and barely maintained since.

Another option that would enable you to visit Hellfire Pass is to find onward transport from Nam Tok and then return to Kanchanaburi by road. But then you miss the return journey over the viaduct and through the scenic countryside as the track follows the river back to Kanchanaburi. 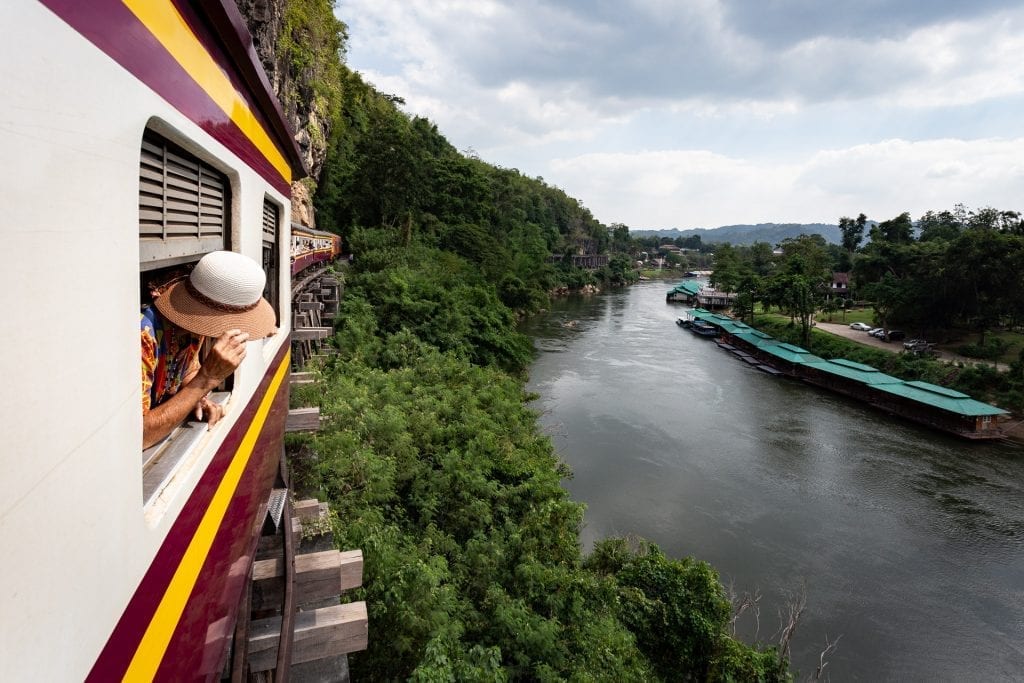 The train slows to a crawl as it passes over the creaking Wampo Viaduct. Since there are only two or three trains per day, people often walk along the tracks to visit a small cave in the cliff face. The slow pace means there is little danger of anyone being caught off guard. This short stretch of track is where the choice of seat becomes important – when coming from Bangkok the left side of the train enjoys spectacular views over the river and you can hang out of the open windows to photograph the moment. While the right-hand side of the train is treated only to a view of the cliff face just centimetres from the window.

The Bridge Over the River Kwai or the Mae Klong? 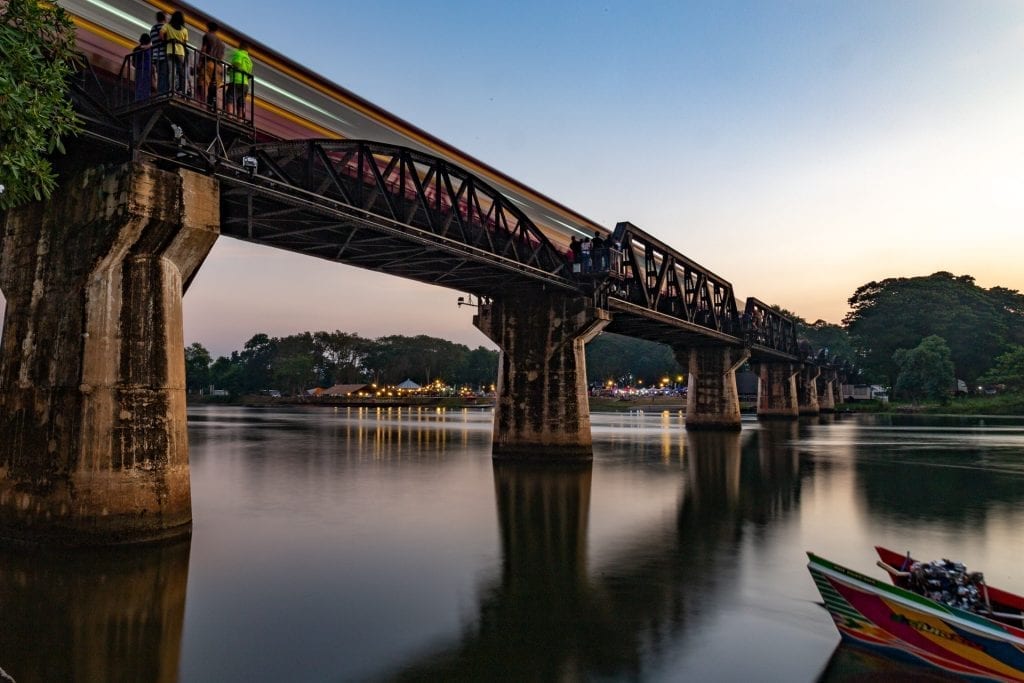 As most websites and guides will tell you, the Bridge over the River Kwai was not built on the River Kwai at all – but actually the Mae Klong river into which the River Kwai flows. The section of river where the bridge stands was renamed the “Kwae Yai” (Big Kwai) after being popularised by the 1957 film, starring Alec Guinness and William Holden.

The Bridge over the River Kwai is not the only rail-based attraction along the Mae Klong river. The famous “Railway Market” is located downstream in Mae Klong town just before it meets the Gulf of Thailand. Rising early for sunrise gives you the opportunity to walk over the bridge without fighting the crowds. Photography enthusiasts can capture the train passing over the bridge at 6:15am and 7:12am with perfect golden hour light.

I had previously visited the Bridge over the River Kwai around 1998. Aside from the huge increase in tourists, I also noticed a significant increase in safety measures. Metal plates are fixed over the floor with railings all along the bridge to aid walking – and so it is no problem to walk over the bridge even at night. Not something that would have been attempted before. Part of the attraction of Kanchanaburi is to explore the history of the death railway and learn more about the events that took place there. A visit to the Kanchanaburi war cemetery in town is a sobering experience – it’s hard not to be moved as you read the names and ages on the graves.

Of all the museums, the JEATH war museum near the bridge is a must visit for historical value. Built on the site where the original wooden bridge once stood – with a small section still intact – it helps tell the story of the two bridges and their wartime destruction.

Photos of The Bridge Over the River Kwai in Kanchanaburi Thailand

Some more photos from our Bangkok to Kanchanaburi train trip.

Search for hotels in Kanchanaburi Thailand with our booking engine below:

For more information about the Bangkok to Kanchanaburi train times, visit the Seat61 website.