Eileen Wise and Roger Hermiston make their last pre-coronavirus London break, staying at The Stafford hotel in St James’s and visiting to the West End to see what could well be Tom Stoppard’s final play. 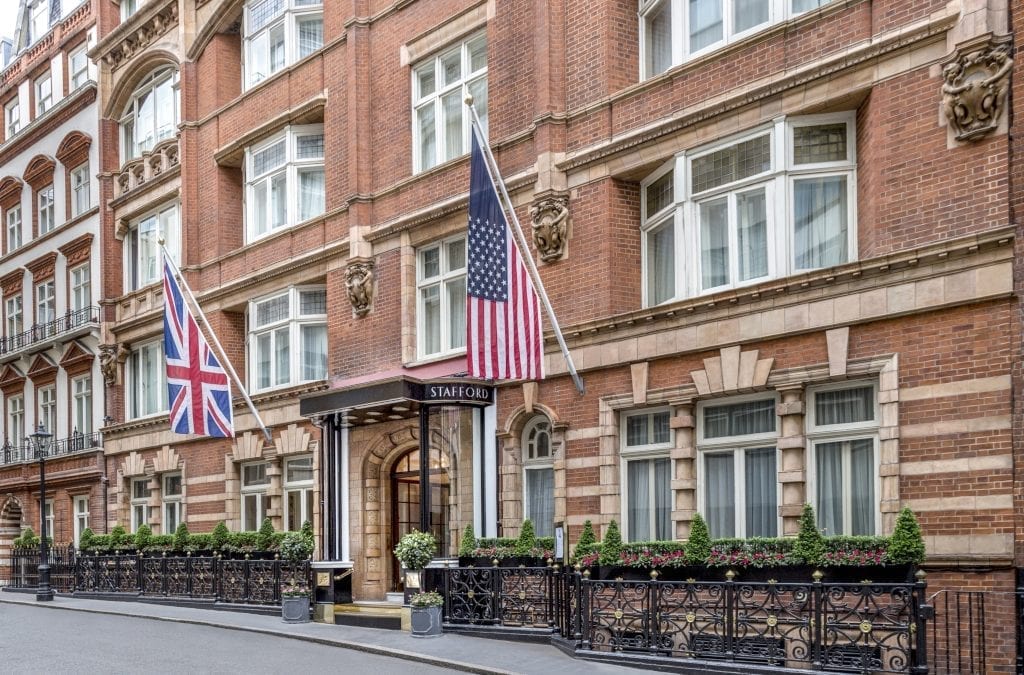 The Stafford London hotel in St James’s reopened its doors on 3 August 2020 after the COVID-19 lockdown. Eileen Wise and Roger Hermiston made their last pre-coronavirus London break staying at The Stafford and visiting the West End to see what could well be Tom Stoppard’s final play.

It will end one day. Those excursions to the capital, staying at a delightful hotel and taking in a stimulating play, will return, and when they do we will appreciate them all the more.

BC – Before Coronavirus – we were lucky to enjoy such a trip which, for various reasons, seemed to chime well with the forthcoming 75th anniversary of VE-Day, the ending of WW2 in Europe.

That was because we were staying at the elegant and welcoming Stafford London, whose wartime memories are as rich as any in the capital. It is perhaps best known for its ‘American Bar’, earning that moniker because in those war days it became a thriving club for US and Canadian soldiers stationed in London.

The American Bar today retains the club-like atmosphere of 1945, with its handsome mahogany-panelled walls and intimate corners. A tasteful, subtle makeover in recent times has injected a brighter, airier feel, blending some stylish custom-designed furniture with the vintage furnishings. But you could still imagine sitting here sipping your cocktails while the German bombs rained down in the streets outside.

You won’t hurry to sit down with your drink though, because first you have to examine the walls – and look upwards to the ceiling – to take in the extraordinary collection of memorabilia in the bar. It all began some 70 years or so ago, when an American guest gave the hotel’s Head Barman, Charles Guano, a small wooden carving of an American eagle. Soon afterwards, a Canadian guest presented him with a small model of an Eskimo.

Every wall and surface is crammed with a fascinating collection of artefacts, knick-knacks, letters and signed celebrity photographs

And so the bar’s collection grew and grew over the years, so that now virtually every wall and surface is crammed with a fascinating collection of artefacts, knick-knacks, letters and signed celebrity photographs.

There’s a photograph of the Spitfire MK 1X, signed by three famous pilots. There’s another photograph presented by the US Army’s 69th Infantry Division, showing three of its soldiers shaking hands with their counterparts from the Great Russian Army on the Elbe River in Germany, as the Allied armies converged at the end of the war. There’s a collage of all the living holders of the Victoria Cross.

But it’s not all wartime memorabilia. There are letters from Ronald Reagan and the Queen Mother, signed photographs of actors as diverse as Michael Caine, John Thaw and Clint Eastwood, and cricketer RES Wyatt. In one hidden corner there’s a tie for the Baker Street Irregulars, a club committed to keeping the memory of Sherlock Holmes alive.

But amongst them all, there’s one photograph that has particular resonance for The Stafford. It’s one of a strikingly pretty woman in service uniform who went on to become the hotel’s most famous, best-loved resident.

Nancy (Grace Augusta) Wake, New Zealand-born, was one of the most extra extraordinary World War 2 spies. Trapped in France when war broke out, she joined an underground network to help Allied airmen evade capture by the Germans and plot their escape to neutral Spain. She was on the Nazis’ Top Ten Wanted List, with a price tag of five million francs on her head.

After escaping to London herself, she was assigned the codename Helene by the SOE (Special Operations Executive) and parachuted back into France to help the Maquis groups. After taking part in a battle with a large German force in July 1944, she then cycled 500 kilometres to send a report back to SOE headquarters in Baker Street.

Nancy was a fixture in the American Bar from 2001-2003, never failing to take her seat at 11 o’clock for her first gin and tonic of the day

This astonishingly resourceful and courageous woman was awarded the George Medal (from the UK), Medal of Freedom (USA) and Legion D’Honneur (France). She loved The Stafford, having visited during the war, and the hotel’s reward to her in her latter years was to offer her free residency.

Nancy was a fixture in the American Bar from 2001-2003, never failing to take her seat at 11 o’clock for her first gin and tonic of the day, perched on a bar stool specially built for her. The Gestapo who failed to hunt her down dubbed her ‘The White Mouse’, and among the many splendid cocktails the bar offers is one of the same name to commemorate her.

‘The subtlety of Saffron Gin, honey for a hint of feminine sweetness, a dash of France with a top-up of champagne, a sharp bite of lemon juice and a garnish of star anise.’ These were the ingredients that made the remarkable Nancy Wise.

A History of The Stafford London

The wine cellars in The Stafford are as old as anywhere in London – 380 years – and in the war made for a secure air-raid shelter. There’s a fascinating little WW2 museum along the corridor, made up of artefacts left by American and Canadian officers. One poster from the grim early days of the war reads ‘The Battle of the Atlantic is being lost’, and goes on to list the Allies’ shortcomings. The writer would surely have found himself in serious trouble for such negative propaganda.

You can hire one of the cellar rooms for dinner, which must be a wonderfully atmospheric experience, eating under ornate chandeliers with candles in the corners throwing a shadowy light across the room.

The Stafford’s origins actually date back to the late 17th century when it was the residence of Lord and Lady Lyttleton. The eleven newish Carriage suites (2017), designed by the world-renowned Alexandra Champalimaud, were once the stables of British nobleman and politician Lord Francis Godolphin. The Stafford joined up all the various buildings on St James’s Place and became a fully-fledged hotel in 1912.

The Main House has 67 rooms and suites, but we were placed in one of the 26 adjoining Mews Suites out in the cobbled courtyard. We had a marvellous set of rooms, of understated yet stylish design, quiet and relaxing. The king-sized bed was supremely comfortable, and we relished our luxury marble bathroom with double washbasin, walk-in shower and huge bath tub. Televisions and other state-of-the-art technology was available if you were staying in.

We, however, were going out, as we were lucky to have secured front row seats for the much-heralded new Tom Stoppard play Leopoldstadt at Wyndham’s Theatre on Charing Cross Road in the heart of the West End. A twenty-minute walk took us to one of the capital’s most famous theatres, across streets and past restaurants eerily empty as the Covid-19 threat loomed.

Wyndham’s opened just twelve years before The Stafford and has an equally vibrant history. In the early days Gerald du Maurier had a 15-year association, and his more famous daughter Daphne presented her own play – The Years Between – here. In April 1953 the theatre premiered Graham Greene’s first play, The Living Room, with a cast including Dorothy Tutin. In the 1970s the musical blockbuster Godspell ran for two years, its original cast featuring David Essex and Jeremy Irons.

We were in thrall to the brilliant Tom Stoppard for the next three-and-a-half hours. Leopoldstadt is a homage to his own Jewish background, albeit he has set his drama in Austria rather than Czechoslovakia. It’s an epic story of one Viennese family spread over more than half a century (1899-1955), faithfully reflecting the wider tragic Jewish experience.

Not that the play is totally dark – far from it. Especially in the first half, it exudes optimism about the potential of a new scientific age, and there are the characteristic Stoppardian intellectual duels. There is wit and warmth amongst the sprawling ensemble of characters, with some excellent performances by the child actors.

Inevitably the mood changes after the interval, as anti-Semitism grows across Europe and war clouds loom. The consequence of the Holocaust on the Merz family is depicted sparingly but sensitively, as much revealed by looks, gestures and halting language as by passionate outbursts. But there is a stunning final scene, so simple in its execution, that leaves a powerful message and an emotional memory.

Our trip to the West End concluded, we walked back to The Stafford, where we were served a late supper in the American Bar. The service here, as everywhere in the hotel, was helpful and enthusiastic. After our customary tour of our favourite Piccadilly haunts – Hatchards and Fortnum and Mason’s to the fore – we got into our car and headed back into Suffolk. Back to what was soon to become – hopefully, just for a few months – a very different sort of world.

The Stafford London hotel reopened its doors on 3 August 2020 after the COVID-19 shutdown. Extensive measures have been taken to ensure the safety of guests, management assures.